Ryan Reynolds father James C. Reynolds has passed away and the actor has paid tribute to his late dad via his Twitter page. In the photo tribute, Reynolds puts a link to The Michael J. Fox Foundation in hopes that people will donate to the good cause. According to Entertainment Weekly, Reynolds’ dad was first diagnosed with Parkinson’s disease in 1995. Later on, Reynolds became involved with The Michael J. Fox Foundation in 2008. On the Today Show, Reynolds previously talked about his father’s diagnosis and how it affected the family, explaining:

I have a slightly different, weird, strange story about that because my father really hasn’t ever said he has Parkinson’s disease. It kind of galvanized everybody else, to sort of seek resources. And for us, it’s in a strange way, it’s really kind of brought us together.

Reynolds and his wife Blake Lively’s daughter is named James, after Reynolds’ father.

Please feel free to donate to The Michael J. Fox Foundation in hopes of finding a cure for this heartbreaking illness. 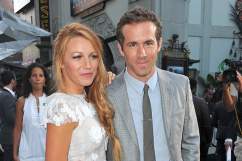