Joe Giudice is currently starring on his own Bravo special, along with his children and his wife Teresa, who calls in from prison each day. On the premiere episode, we got a taste of the life Joe has without his wife around. He has four daughters (Gia, 14, Gabriella, 10, Milania, 9, and Audriana) to take care of and he has help from family, along with eldest daughter Gia, who has stepped up to the plate at home. Teresa Giudice’s release date has been pushed up and is scheduled to be December 23, 2015, so the family will be together for Christmas this year. Then, Joe goes in to serve his time, which is a 41-month sentence. A source told People:

They’ll definitely spend Christmas together. He goes in in March, so they’ll have a couple of months together, which is great.

While Teresa Giudice is in prison, she is writing her own memoir. It is called “Turning the Tables: From Housewife to Inmate and Back Again” and it is scheduled to be released on February 9, 2016 by Gallery Books. Publisher Jennifer Bergstrom told People:

While we’ve all watched Teresa’s life unfold on television, ‘Turning the Tables’ will mark the first time we will hear all of Teresa’s incredible life story, including her recent stint in prison.

For more information on the Giudice family: 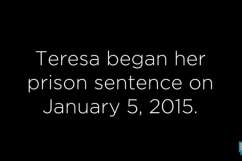 When Does Teresa Giudice Get Out of Prison?