Nick Carter kills it each week and tonight he channels Saturday Night Fever as John Travolta on Dancing With The Stars, opposite pro partner Sharna Burgess. Judge Carrie Ann Inaba is hoping to see how routines are carried out by the dancers and how well they pull them off tonight.

Tonight, Hayes Grier is also portraying John Travolta, but in a routine from the movie Grease. Grier admits he has never seen the movie and had no idea who the characters were. Yikes. Because Carter, who is an amazing dancer, is also performing as Travolta, Grier was definitely feeling the pressure.

Last week, Carter danced with pro Witney Carson on the show and he took the lead more because she seemed to not be as invested in him as she is with her normal partner Carlos PenaVega. Perhaps because Carter is her partner’s competition she didn’t want to give him more ammunition to win. However, this is kind of bad sportsmanship in our eyes, though we have love for Carson. Despite this, Carter still excelled in his performance. 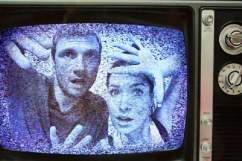 Nick Carter on ‘Dancing With The Stars’ – Week 3