UPDATE: When sitting down with Captain Lee, Leon shows a ton of attitude and puts the blame on everyone else. Captain Lee then tells Leon it will be his last charter and Leon decides he will not finish the charter. Leon leaves and Rocky says that she’s leaving if Leon is leaving. Amy and Eddie try to dissuade Rocky from leaving, but she becomes upset, takes off her clothes and jumps into the water. Rocky eventually returns to the boat and hides in her room. She gets on the phone with her parents, who make her realize she needs to finish the charter. Because of Rocky’s attitude, Eddie no longer wants to fool around with her.

On tonight’s episode of Below Deck, it appears as though we lose two cast members, but gain a former cast favorite. Chef Leon Walker has been rubbing several of the crew members the wrong way. His disdain for head stew Kate has evolved into a very hostile attitude towards her as well as his job in general. Stew Amy has noticed this as well and the rest of the crew members are sick of feeling the tension. Captain Lee has noticed the issues that have been going on between Kate and Leon as well. When Lee catches Leon sleeping on the job, leaving others to do his job in the kitchen, he becomes frustrated. At one point, Kate causes a small fire in the kitchen because she’s doing her job as well as Leon’s. Leon tries to throw Kate under the bus by fully blaming her to the Captain and even saying that she was drinking on the job. The next thing we see in the promos for this episode is Chef Ben Robinson “coming to the rescue.” So, either Chef Leon quits or he gets fired. Our guess is that he gets fired … What do you think?

For those of you who don’t remember Ben, he has been the chef on the show in past seasons. He provides great comic relief and he just lights up the atmosphere on each boat. He currently is a private chef and has his own catering company in Fort Lauderdale, Florida.

As for Raquel Dakota, more commonly known as Rocky, it looks like she goes off the deep end. In promos, we’ve seen her take off her clothes and jump overboard as engineer Eddie gets on his walkie talkie and alerts the crew. At some point, Rocky seems to reveal the secret that she and Eddie have been hooking up together in the laundry room. Eddie confronts her and is very upset. Rocky has shown her crazy side a bit on the show, so here are the scenarios we’ve come up with: She gets fired and jumps overboard; she becomes so frustrated that she takes off her clothes and jumps overboard, which gets her fired; she quits and jumps off the boat. What do you think?

For more Below Deck news: 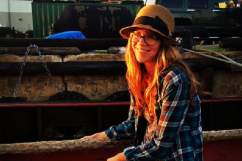 Read More
Below Deck, Bravo, Reality TV, TV
Chef Ben Robinson returns to Below Deck. Do Rocky Dakota and Leon Walker get fired or quit today? Read on for details.