Over the past season of Real Housewives of Orange County, we’ve watched Shannon Beador’s marriage to her husband David deal with a very rocky patch. The two struggle with the effects of David’s having an affair for eight months. Viewers saw the couples fight constantly, go through therapy, and fight to stay together. Fortunately, according to Shannon Beador, the two are back on track and recently celebrated their 15th anniversary. Beador wrote in her Bravo blog:

It has been a very emotional season for me. Most of my relationships have drastically changed. The most important transformation has been that of my marriage. I am so happy that you get to see David and I smile in this episode because we do a lot of that together today. Through forgiveness, effort, and commitment, my marriage is in the best place it has ever been in the 15 years we have been married. Our children are flourishing and our family is strong and together.

Tamra actually told the group about David’s affair at a dinner we were all at, and even disclosed the woman’s name and information about her.

In the reunion of the RHOC this season, Shannon says she believes David cheated on her because she was constantly negative and nagging him a lot. The other women chime in and say that there’s no excuse. Heather Dubrow says that you either fix the situation or you leave; you don’t cheat.

Happy 15th Anniversary to my husband who I love with all my heart! We have definitely been through so much, but I never could have imagined we would be in the amazing and blessed place we are today! ❤️

For more information on Shannon Beador and husband David: 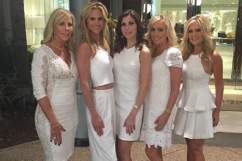