Stephen Amell does a bit of everything. He plays a superhero on TV, is a super dad at home and, this summer, even stepped into the wrestling ring when he guest starred on WWE Summer Slam. The Toronto native, who has made his Blue Jays fandom known throughout the baseball season this year, first started acting in 2004 and had bit roles in a handful of TV shows over the next few years. Still, Amell is best known for his role as Oliver Queen on the CW series Arrow, a character he seems ready to play for the foreseeable future. Still, there's plenty to Amell away from the superhero suit. Click through the gallery to learn more about his family and his life away from the camera. (Instagram) 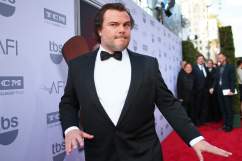 Read More
Arrow, CW, TV
He plays a superhero on TV and he's also a bit of a superhero in real life. Get to know Stephen Amell with some of his best social media moments.