The Vampire Diaries Season 7 Episode 3 is on tonight at 8:00 P.M. ET/PT on The CW, and is titled “Age of Innocence.” Read on for a recap of Episode 2 and a sneak peak into Episode 3 with a synopsis, trailers and spoilers.

The official description of Episode 3 from The CW website reads:

FLASHBACKS TO 1863 — In the aftermath of a clever plan orchestrated by Lily (Annie Wersching), Damon (Ian Somerhalder) sets off on a road trip with Bonnie (Kat Graham) and Alaric (Matt Davis) in search of leverage they can use against his mother. Meanwhile, Caroline (Candice King), who is being held hostage by the Heretics, learns some shocking information about Valerie’s past, while Stefan (Paul Wesley) learns a few unexpected details about his own past from Lily. Finally, Alaric turns to Bonnie for her help after coming clean about a secret he’s been keeping. Michael Allowitz directed the episode written by Melinda Hsu Taylor & Holly Brix (#703). Original airdate 10/22/2015.”

In last week’s episode, the Heretics continued their wrath by torturing Caroline who is still held captive, and stealing the body of Elena Gilbert to get back at Damon Salvatore for murdering Heretic Malcolm. There is no doubt that Damon will go to any measure to protect Elena, and things are bound to get even more crazy between the Heretics and Salvatore group.

Alaric also faces some dangerous consequences because he held onto the infamous Phoenix Stone after Bonnie made him promise to destroy it. Bonnie examined the stone and it gave her violent graphic visions and was obviously used for dark forbidden magic. The stone also later caused Bonnie to have a very inconvenient blackout and she almost was not able to revive Matt after he agreed to let her temporarily stop his heart. Matt was helping the Salvatore brothers reclaim ownership of their house to rescue Caroline. The episode ended with a curious Alaric placing the stone on a dead body to see if it had the power of necromancy; the stone’s powers were proven when the dead body gasped for air. Since he has kept his wife Jo’s body on ice since she was murdered at their wedding, it is only a matter of time before he attempts to use the stone to bring her back.

Check Out The Vampire Diaries Season 7 Episode 3 Trailers Below

Bonnie recruits a group to help her get the Phoenix Stone from Alaric. Many people and supernaturals are seeking the Phoenix stone, and will go to any lengths to get it, putting Alaric and everyone else in Mystic Falls in danger. Damon goes after another Heretic that is not living with Lily and her family to motivate them to give Elena’s sleeping body back, Lily is furious.

Lily gets a flat tire while practicing her driving and is confronted by Stefan. Stefan goes ahead with his and Damon’s plan to fabricate a fight between the brothers so Stefan can get back into Lily’s good graces. Lily buys the trick and believes that Stefan is glad that her and the Heretics made Damon leave town. Stefan tells Lily to make Mary Louise and Nora stop torturing Caroline. Stefan asks about Heretic Valerie who he used to know, and Lily said she knew her long before and was responsible for sending Valerie to meet Stefan all those years ago. 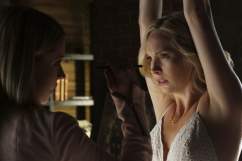