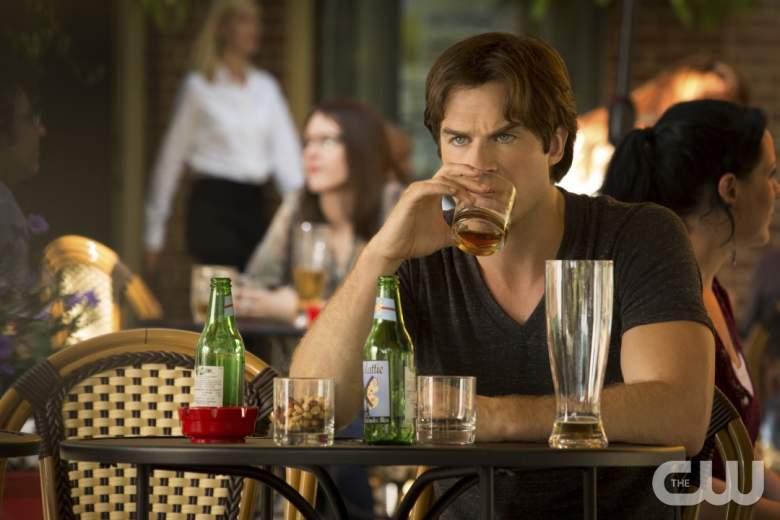 The Vampire Diaries – Damon Salvatore drinks away his sorrows over Elena in Amsterdam. (The CW)

The Vampire Diaries Season 7 premiere is tonight at 8:00 P.M. ET/PT on The CW, and is titled “Day One of Twenty-Two Thousand, Give or Take.” Read on for spoilers, synopsis and trailers on how Season 6 ended and Season 7 starts.

Damon Deals With the Loss of Elena Gilbert

With Nina Dobrev having left the show in Season 6, and consequently leaving her character Elena Gilbert asleep while best friend Bonnie lives, many have wondered how the story will continue without her. It seems that the arrival of the Heretics (witch-vampire hybrids) to Mystic Falls, lead by Damon and Stefan Salvatore’ ripper mother Lily, will cause plenty of destruction to keep our minds occupied.

We are not the only ones dealing with the loss of Elena for the next 60 or 70 odd years, all the characters are dealing with the loss in their own ways. Damon Salvatore (Ian Somerhalder) is back to his old ways of dealing with his emotions by boozing with his best friend Alarac (Matt Davis). The season starts by following them on a binge drinking trip to Amsterdam, accompanied by Bonnie (Kat Graham) who documents the events in her diary while keeping an eye on them. Alarac being just as distraught over the traumatic loss of his pregnant wife who was killed during Kai’ massacre on their wedding day.

Check out The Vampire Diaries Season 7 & Episode 1 Trailers Below

Episode 1 teaser with commentary from Executive Producers Julie Plec and Caroline Dries. Enzo is having trouble choosing sides with the Heretics and his creator Lily, or the Salvatore group (Stefan, Damon, Caroline, and Bonnie).

Stefan Salvatore (Paul Wesley) and Caroline Forbes (Candice Accola) deal with awkwardness after Stefan admits to his feelings towards her.

The Official Synopsis of Season 7 From The CW Website

Season seven of THE VAMPIRE DIARIES finds those closest to Elena Gilbert striving to redefine themselves in the wake of losing her. Some recover, while others slide back to their darkest selves. Lily takes advantage of this rocky emotional terrain and works to drive a wedge between her sons, even as she loses control of her volatile family. As the Heretics take up residence in Mystic Falls, Matt (Zach Roerig) will stand up for the humans, while Bonnie’s fighter instincts harden as she spends more and more time with Damon. Alaric hits rock bottom before finding new hope in an impossible supernatural mystery—which could either be his salvation, or the ultimate test of Stefan and Caroline’s love story. And looming over all the present-day suspense, flash-forwards to three years in the future will show glimpses of a horrific supernatural threat with profound consequences for our heroes and Mystic Falls.

The Official Recap of Season 6 From the CW Website

In season six, after his girlfriend Elena (Nina Dobrev) was forced into a supernatural coma, Damon (Ian Somerhalder) vowed to protect Bonnie (Kat Graham) at all costs, even though Bonnie’s life is now linked to Damon’s happiness. Stefan (Paul Wesley) and Caroline (Candice King) put their relationship on hold after a rollercoaster romance provoked by Caroline’s mother’s death. Alaric (Matt Davis) lost his fiancée, Jo, along with the twin babies she was carrying. And Lily Salvatore (guest star Annie Wersching), Damon and Stefan’s mother, emerged from a supernatural prison with the help of Enzo (Michael Malarkey), bringing with her a sinister family of witch-vampire hybrids called the Heretics (guest stars Elizabeth Blackmore, Scarlett Byrne, Teressa Liane, Tim Kang and Jaiden Kaine).