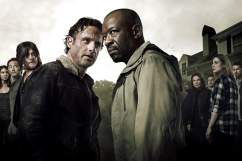 Check out all the highlights of the best moments that transpired during the 2nd episode airing of The Walking Dead’s Season 6 run. Be sure to head to the next page to get every detail on everything that occurred.

1. We Follow The Journey of a Young Girl Up Who’s Just Lost Her Parents to a Pack of Hungry Zombies

A lone girl can be seen keeping watch inside a car as her parents talk in the background. A pair of zombies make their way towards her and soon her parents become their victims. When a downpour of rain begins to fall, the young girl walks by her lonesome and soon takes refuge behind a wooden sign in the forest. She writes the letters “JSS” in the dirt and then makes her way out of the forest. She then discovers a car with a live zombie laying outside the driver side. She kills the zombie, goes inside the car and writes “JSS” onto the car’s dusty window as she stays inside.

In order to keep her extreme hunger at bay, she comes upon a turtle and begins to feast on it. The bones that she takes from the turtle are used to spell out those three familiar letters once again. She keeps traveling and soon comes upon Alexandria’s front gate. She turns away for a quick second and contemplates her next move. She’s eventually welcomed into the community with the letters “JSS” written onto her dusty hand.

2. Someone Invades Alexandria and Kills an Alexandria Community Member

Carol and the main kitchen cooks talk about all the food staples they have in stock. Jessie’s son is sitting in front of Rick’s home and he seems to be contemplating his father’s death. Carol tells him to get over what happened and come to grips with what happened. Back in Jessie’s house, her and her son Ron get into a verbal altercation over the death of their husband/father. Deanna and Maggie walk outside and speak about her dead husband’s aspirations to make Alexandria’s walls much more stronger.

Tara and Eugene walk into a the medical center and meet Denise as they have a conversation. Denise is the new doctor of Alexandria, who gives her brief backstory on why she’s interested in the medical field. Carl can be seen pushing his baby sister and sees his female friend speaking with Jessie’s son. Gabriel stops him during his afternoon stroll to let Carl know he’s ready to learn how to fight and survive once again. Carl spots Ron hugging his female friend as he stares and walks by with a disturbed look on his face.

Carol keeps her eyes on her next hot meal. She looks outside the window and spots one of the female community members smoking a cigarette. All of a sudden, she spots a heavy set man run at her the woman outside. He viciously cuts her down, which drives Carol to run outside and get into action.

3. A Group of Raging Attackers With The Letter “W” on Their Foreheads Disturb Alexandria

Screams of help can be heard as Deanna and Maggie are digging. Firebombs are then flung over the gate from some unknown attackers. Carl and Carol got ready for war as a group of denizens with knives rampage all over the streets. Jessie and her son hide in the closet as someone invades their home. As the random attack rages on outside, Carl runs into his female friend. She comes to tell him that she’s leaving, but Carl is adamant about her staying. She notes that it’s too unsafe to stay in Alexandria and alludes to the fact that she may know the people that are attacking Alexandria.

These attackers are the folks who have the letter “W” written onto their foreheads. Carol is forced to kill her friend after seeing her get slashed. Spencer snipes all these attackers from the tower and tries to off some of them. All of a sudden, a huge truck smashes through the walls of Alexandria. The horn goes off as it lays prone within Alexandria. This is the big horn that changed the zombies’ direction in the last episode. 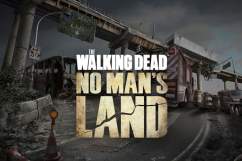