Justin Bieber finally reacted to stories about his dad’s comments on his nude Bora Bora photos. The photos were taken while he was skinny dipping with model Jayde Pierce. In a tweet that has since been deleted, his dad wrote: “What do you feed that thing?” Bieber said he thought the whole thing was hilarious. The interview took place on Zach Sang & the Gang, a radio show. Bieber also said he thought it was ridiculous that people were hating on his dad for the comment. “It’s not like he’s saying it to an 11-year-old. I’m 21 years old.” 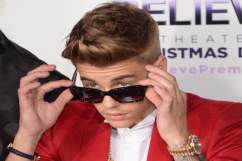