Alexa PenaVega is a contestant on Dancing With the Stars and is paired with pro Mark Ballas. Read on for the facts on the dancing duo.

1. Alexa PenaVega Is Being Pitted Against Her Husband On the Show

Nothing like being inspired by what you wear!!! "Be a Seeker" @fit_to_wander @kohls

At the beginning of the DWTS season, it was announced that the first husband and wife cast members were being added to the show. Before each of their performances, they would be compared to each other, but now the two seem to be coming into their own as competitors. While Alexa’s husband Carlos has been winning over the judges, Alexa has not had as easy of a time though she is very good. She sometimes has difficult being as free in her movements.

In the first dance-off challenge of the season, will Alexa and Carlos go up against each other? Alexa tells People:

I will say that I told Carlos he better not pick me in the dance-off if it comes to that. I told him, “Don’t you dare challenge me!” But I don’t think he wants to pick me because then that means one of us has to lose against the other. We don’t want to do that to each other. 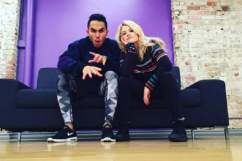 2. PenaVega Scored Higher With Pro Derek Hough Than With Her Partner Mark Ballas

It takes two to Tango. #DWTS

Every season, there is a “switch up” week where the contestants change partners for the week. PenaVega was paired with Derek Hough and earned a perfect score, which was her highest score by far this season. Hough worked on building PenaVega up since she had been beaten down a little by the judges, herself and by her state in the competition. Though she scored higher with Hough, make no mistake because Ballas is an amazing choreographer as well as teacher.

3. Mark Ballas Has a Longtime Girlfriend Who’s Appeared On the Show

Mark Ballas’ longtime girlfriend BC Jean is a gorgeous blonde music artist who has performed with her musician boyfriend on many occasions. She’s even appeared as a singer on Dancing With The Stars in the past. On BC Jean’s Instagram account, she calls herself a,” Singer/Songwriter/WiLdChiLd/Hippie heart & rock’n’roll soul/following the Wind/Passion has control.”

For more information on BC Jean and her relationship with Ballas, check out the below link:

4. They May Be Up for Elimination

All dance and no play makes @markballas a dull boy! ? Run while you can @vegaalexa! #DWTS #TeamBaega

Alexa PenaVega and Ballas have been in jeopardy on the show and the first time that they were, PenaVega became extremely emotional. She began to sob in Ballas’ arms and it was very touching to see how he was there to comfort her.

5. Jealousy Was Almost An Issue for Alexa and Her Husband

Had a blast this morning!!! Love doing press with my Los!!! Thank you to the amazing @muabebebooth and @sienree for getting us ready!

At the beginning of the season, Alexa’s husband Carlos was worried that jealousy would be a problem. He wrote in his blog:

The main thing that concerned me was the fact that Lex was going to potentially have another guy groping her on the dance floor for the next three months. I wasn’t sure I could handle that. But, I learned very quickly that just because dance is a very intimate sport, it doesn’t mean anything once the song is over. It wasn’t until we started rehearsal and I was grabbing Witney that I realized that. Your mind doesn’t even go there. You’re just focused on getting the steps right and doing well.

Hey, if Alexa could handle her husband’s stripper routine to “Pony” by Ginuwine, they can handle anything.