Tonight was a big night on Dancing With the Stars. Contestants honored those they idolized and there were also some big announcements. For one, Nick Carter announced that he and his wife Lauren Kitt Carter are expecting a baby. They then did their gender reveal live on the show and they were pleased to find out they are having a boy. In addition to their individual performances, the cast members also had to perform dance-offs against each other in hopes of earning extra points from live voters.

Of course, there was a couple that had to be sent home … The first couple announced as safe was Bindi Irwin and Derek Hough and the second was Tamar Braxton with Val Chmerkovskiy. Also safe was Alek Skarlatos and Lindsay Arnold, along with Alexa PenaVega and Mark Ballas. This meant that Carlos PenaVega and Andy Grammer were the two bottom contestants.

In the end, the contestant who said goodbye tonight was … Andy Grammer. 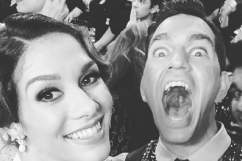