Recently, Scott Disick and Kourtney Kardashian were spotted together at an event in Malibu and now people are wondering if they are back together. TMZ reported that they were celebrating the release of celeb pastor Rich Wilkerson Jr’s new book with party-goers including Justin Bieber, Patrick Schwarzenegger and Omarion. TMZ has also stated that Kardashian has “left the door open” for Disick to turn his life around and rejoin the family. A source revealed that Disick has been a “changed man” and has been wonderfully different since checking into rehab after the couple’s break up.

On October 14, 2015, the news broke that Disick had entered rehab and now a source tells Us Weekly that:

He still goes to the rehab center every day but he doesn’t stay overnight. When he’s not there he’s been with his sober companion who watches over him.

Disick and Kardashian broke up in July 2015 after photos were leaked of Disick appearing affectionate with an ex, celebrity stylist Chloe Bartoli. He was also reported to go on a party binge following the break up and was later photographed hanging out with 18-year-old model Lindsay Vrckovnik.

On season 11 of Keeping Up With the Kardashians, we get an inside look at the break up of Disick and Kardashian. Disick cries to Kourtney and her family members that the split was extremely difficult for him, especially because he went from having the support of the whole family to having none at all.

Kourtney Kardashian and Disick have three children together – Mason, 5, Penelope, 3, and Reign, 11 months.

For more news on the couple: 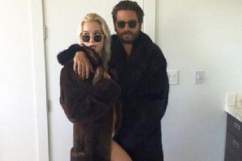 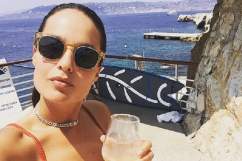