Bella Hadid, 19, and The Weeknd, 25, appear to be a happy couple, but now there are reports that Hadid may be cheating on her boyfriend. Page Six reporter Carlos Greer writes that:

We’re hearing Hadid has again been seeing her old beau Matt Morton, son of Hard Rock mogul Peter and brother of hospitality bigwig Harry. Our source said Bella and Matt used to be an item and they’ve been hanging out again since he started studying at NYU.

Matt was at her birthday party in early October, but other than that they haven’t been in the company of each other in the past six months. And [The Weeknd] was at the party with her. They run in the same circles, but there’s no truth to [them hooking up] at all.

Hadid and The Weeknd were first spotted together at Coachella in April 2015. The Weeknd talked about meeting her to Rolling Stone and stated:

I actually asked her to be on the artwork for Beauty Behind the Madness. My motive was literally to work with her.

Hadid declined the offer to appear on the #1 album and The Weeknd’s reaction was this:

I was like, ‘Alright, cool – we can meet up face-to-face. It just kind of fell into my lap. If this had happened two years ago – well she couldn’t. But if I’d met someone two years ago, I probably would’ve fucked it up. But I’m more – how do I say it? – clear-thinking now. 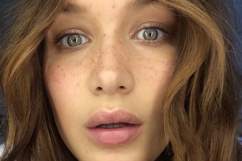