Brooks Ayers and Vicki Gunvalson have been under scrutiny for months because of Ayers’ controversial cancer diagnosis. In response, Ayers has given several interviews to defend himself, from 20/20 to Bravo. Check out the full, hour-long interview Ayers did with E! News in the above video.

E! News sat down with Ayers not once but twice and his interviewer Melanie Bromley said that there were many red flags that make the reality of Ayers actually having cancer seem to be a lie after all. She, in fact, flat out said that Ayers lied. E! News reports the following “red flags” when it came to Bromley’s meetings with Ayers.

Red Flag 1: In our first interview, Brooks said that nothing about his and Vicki’s storyline had ever been made up or manipulated. In the final reunion, however, Vicki admitted she made up the story about Terry Dubrow giving Brooks an IV in the middle of the night.

Brooks’ explanation: Vicki lied, it was nothing to do with him.

Red Flag 2: Brooks told me multiple times he was diagnosed in October 2014. But I have seen a text between Vicki and another cast mate, dated Sept. 9, that announces the diagnosis, a full month beforehand.

His explanation: I can’t remember the exact date.

Red Flag 3: Brooks had previously told me he had only drunk alcohol twice since his diagnosis, on his birthday and Vicki’s birthday. But I had found new evidence that he had consumed alcohol on other occasions.

His explanation: I was talking about drinking “on camera.” He then admitted he drinks alcohol a couple of times a week.

Red Flag 4: Scangate. The discrepancies in the PET scan document he showed on camera to Tamra. It was on a letterhead for a company that does not do the type of scan he claimed he had. At the third reunion, both Vicki’s daughter, Briana, and Shannon were insistent it could not be authentic. Shannon even offered up a report from a scan that she underwent at the same clinic as part of her quest to prove that Brooks was lying.

His explanation: After going back and forth in blaming the women, he said, “I don’t have an answer for you.”

To read all of the red flags that E! has provided, click here.

Since Ayers’ multiple interviews, his ex Vicki Gunvalson finally decided to speak out against him and she had some strong words of hatred when talking to Extra about Ayers. Gunvalson said:

Karma … I hate him, I hate him with everything in me, and I don’t hate people, but I believed him, I trusted him, I defended him, took a bullet for him when people didn’t like him.

Besides Gunvalson speaking out, the City of Hope hospital where Ayers claimed to get cancer treatments verified to E! that they never had a patient by the name of “David Brooks Ayers” at their facilities. Gunvalson’s daughter Brianna Culberson stated on several occasions that Ayers first told her that he actually had pancreatitis when she questioned him about his diagnosis. RHOC cast member Meghan King Edmonds spoke with exes of Ayers who said he had faked cancer in the past. The list goes on and upon. Upon hearing the facts provided by E! News, each of the cast members had strong reactions. Edmonds stated that:

I pray for him. I would want to tell him that I hope he finds the truth somewhere in his life. The truth will set you free. It’s a very sad and disgusting situation. I never believed I would be surrounded by such lies but hopefully now we can focus on the truth.

For more news on Brooks Ayers: 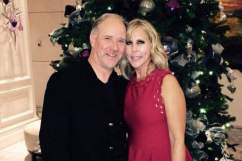