It’s the 2015 CMA Awards and hosts Brad Paisley and Carrie Underwood kicked off the night in a pre-recorded Star Wars themed skit that was star-studded with country artists Luke Bryan, Little Big Town and Darius Rucker. Following the skit, Hank Williams Jr. and Eric Church got together for the opening performance, which was a long-awaited collaboration. The two decided to start off with the song “Are You Ready For The Country?” Once they finished, John Mellencamp and Keith Urban took the stage for their collaboration in the song “Pink Houses.” The duet was followed up by Urban performing a solo act.

For the eighth year, Carrie Underwood and Brad Paisley hosted the show, starting off with a little song making fun of current events. They then moved into their opening monologue, talking about Underwood having a baby. They then talk about all the couples that have broken up and skirted around the break up of country royalty Miranda Lambert and Blake Shelton by talking about the split up of Kermit the Frog and Miss Piggy. They ended that with saying “hi” to Shelton, which got a huge laugh from the crowd.

The duo then started to sing about cheating website Ashley Madison and Josh Duggar. Underwood and Paisley then talked about the amazing collaborations set up for the evening, most notably Justin Timberlake with Chris Stapleton. Paisley joked about Timberlake possibly performing “Dick In A Box.”

Then, William Shatner appeared in a Storm Trooper costume and poked fun at country singer Sam Hunt. After Shatner left the stage, Paisley dropped his pants and Underwood appeared horrified. Paisley pleaded with her to do a “naked selfie moment.” She was not having it. 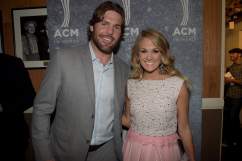