UPDATE: About 20 minutes before the end of the show, Tamar Braxton returned straight from the hospital to compete in the duet dance.

Tamar Braxton was rushed to the hospital with pneumonia a couple days ago and there’s no telling if she’ll be able to stay in the competition on Dancing With the Stars. TMZ has reported that Braxton is in the ER and it’s doubtful she will make it to the live show. At the beginning of DWTS tonight, host Tom Bergeron announced the news, but said we will have to wait and see if Braxton will show up to dance. If she’s unable to dance tonight, it would mean she could be disqualified, just as Kim Zolciak was on the show earlier this season when she suffered a minor stroke. According to TMZ, Braxton has pneumonia. We have seen signs of this as over the past couple weeks Braxton was visibly sick in rehearsals and lost her voice at one point. TMZ states:

We’re told Braxton has pneumonia — something she’s been battling for two weeks, and while rehearsing her dances for Monday night’s show she became extremely sick.
Sources tell us that Braxton’s husband rushed her to the hospital.

Because Braxton did not show up to dance live on the show, DWTS played her performance video from the dress rehearsal, filmed earlier in the day.

Is this the end for Tamar and pro partner Val Chmerkovskiy on the show?

Join us in sending out positive thoughts for @TamarBraxtonHer. We will keep you updated on her condition. #DWTS 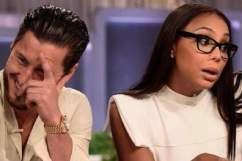