Who kidnapped Hakeem Lyon? And why? We’ve got plenty of theories right here. (Instagram)

If you’re an Empire fan who has spent any time on the internet in the last two weeks, you’ve run across the dozens and dozens of rumors and speculation regarding Hakeem Lyon.

The youngest member of the Empire dynasty, Hakeem (Bryshere Y. Gray) was pulled off a jogging path at the end of the FOX hit’s latest episode, but, thanks to the World Series, fans have been waiting with baited breath to find out his fate.

Check out the latest clip from Wednesday night’s episode and let’s all hope that Hakeem stops mouthing off to his kidnappers:

But, more importantly, it’s time to find out who kidnapped Hakeem in the first place. Let’s run through the most popular options:

Thirsty: Lucious’ lawyer is a front-runner for the ringleader behind Hakeem’s kidnapping. After all, he knows some of the Lyon family’s deepest darkest secrets and kidnapping Hakeem could be perfect leverage to force some money out of the Empire for keeping those secrets.

Frank’s Daughter: Lucious did attack her father in prison. Is it possible that she found out what happened and orchestrated Hakeem’s kidnapping as a bit of revenge?

Roxanne Ford: The prosecutor has been nothing short of ruthless all season and sh’es already shown that she’s willing to work outside the box of the law to bring down Lucious. Kidnapping his son is definitely outside the box.

The Same Gang That Robbed Tiana: The group made a YouTube video threatening Tiana last episode and no one really took them seriously. They were wearing masks. One way to make sure everyone takes them seriously is to kidnap Hakeem.

Lucious: Could Hakeem’s own father be behind the kidnapping? Is this just a move to make sure that Hakeem is locked in with the Empire?

Or was it someone totally different? This is Empire, after all. We’ve all come to expect the unexpected at this point. Sound off in the comments with your own theories and tune into Wednesday night’s brand-new episode at 9 p.m. ET on FOX. 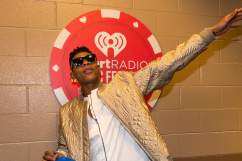