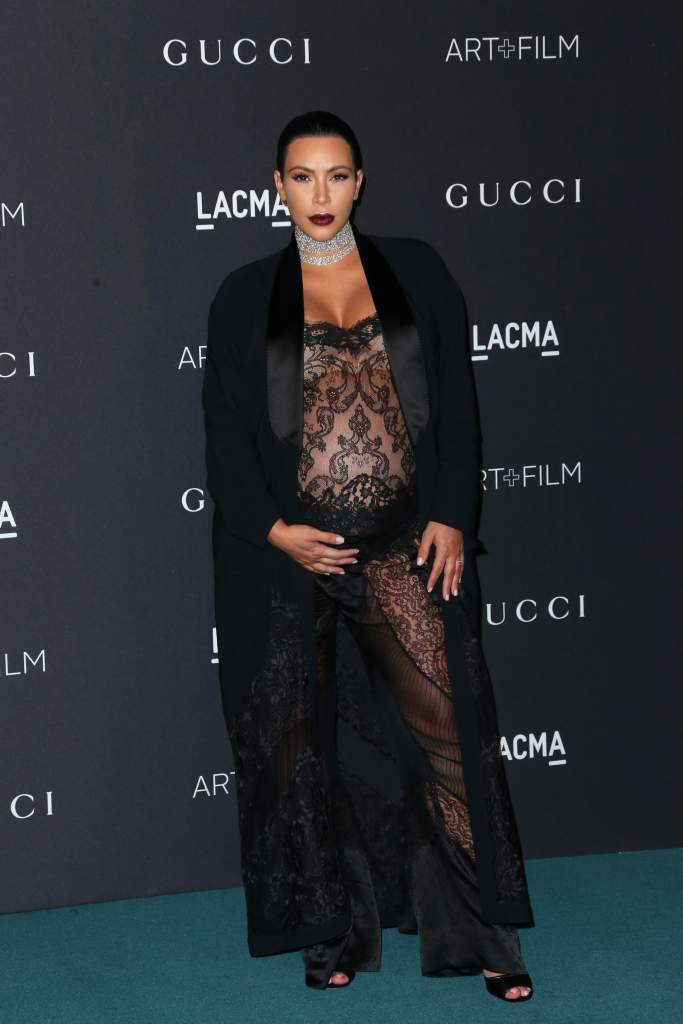 Kim Kardashian gave birth to her second child today after announcing last night on Instagram that she was, “ready whenever,” the baby was. (Getty)

Kim Kardashian West and Kanye West welcomed their second child into the world this past weekend. Kim announced on her website Saturday morning that she gave birth to her baby and, “Mother and son are doing well.”

The have revealed the name of their new baby boy, Saint West, luckily direction names were ruled out early on, although Kim did like the name Easton at first.

But the baby’s name is already getting a lot of attention, according to TMZ, a Canadian rapper with the name Saint West was asked by Twitter to give up his handle due to inactivity. Twitter noticed his inactive account, which is determined if a user does not post something at least every six months, only after tons of people were searching for Saint West and expecting to find the Twitter account for Kimye’s new baby.

Before the baby was named, people were also pointing out the irony of names such as “Wild West,” and “Yeezus Christ.”

Kim and Kanye are calling there baby Yeezus Christ.

Family, friends and fans alike were excited about the news and expressed their excitement on Twitter using #WELCOMEBABYBOYWEST and “Kim and Kanye” as well as “#KimKardashian” are trending.

Read on to learn about Kim’s pregnancy, preparing North for the big day, and to see what fans were saying right after the news of Saint West’s birth.

Just last night Kardashian posted a picture of her very pregnant stomach on social media with the message, “Ready whenever you are lol.”

Ready whenever you are lol pic.twitter.com/Qbk5i2vb28

Looks like the baby got the message and was born this morning. “Kim is absolutely overjoyed with the birth of her perfect baby boy. She gave birth naturally, her preferred way, and she must be a pro because this time around Kim felt it was a lot easier giving birth,” according to a source for HollywoodLife.com.

Despite Kardashian having trouble conceiving her second child (she has talked about needing a hysterectomy), she was able to get pregnant with a successful in vitro fertilization treatment.

“Kim also had three surgeries to repair her uterus. The inner lining had been so damaged that she was told conceiving on her own wasn’t possible,” a source told People.

She announced her pregnancy in May but said this may be her last child.

“They think I’ll have placenta accreta again, so if the placenta grows a little bit deeper than it did last time, then they are prepared to have my uterus removed, which is a little scary for me.”

She had actually been very open about her pregnancy troubles and explains everything in a post on her website.

“This pregnancy, I’m definitely scared for my delivery, but trying my best to be hopeful and not stress out too much! Last pregnancy, I had a condition called preeclampsia, which is a serious condition you can get during pregnancy; often, the only way to get rid of it is to deliver early to protect yourself and the baby. Only about 5 percent of woman get this. Lucky me! It causes your body and face to swell, and that was very uncomfortable for me. I had early-onset preeclampsia and I had to deliver at 34 weeks, almost six weeks early. We induced my labor and I had North soon after. Right after delivery, the placenta usually then comes out. Mine did not. My placenta stayed attached inside my uterus, which is a condition called placenta accreta. This is a high-risk condition that happens when the placenta grows too deeply into the uterine wall.”

Between gaining 60 pounds during her pregnancy and having a painful surgery to move the baby so it was not born breech, Kardashian hoped the baby, who was supposed to be born on Christmas Day, would be healthy and she would be able to get her model body back. She wrote on her website,

“A few weeks to go and 60 pounds up! I look at other celebrities and Instagram girls who are literally so skinny right after giving birth. How is that possible?!?!”

But her pregnancy has been successful and Kardashian has been preoccupied with other things, such as her “pregnant birthday,” party West threw for her where everyone wore fake baby bumps.

The family has been preparing daughter North West for the day she would officially become a big sister. “We read books with her about getting a baby brother and a new sibling all the time! We always say goodnight to baby brother,” according to People.

Kardashian told People recently that she is a little nervous for North’s reaction to the baby because she gets upset when her mom holds other babies.

“I don’t have that many more nights with just me and her before the baby comes and changes her world completely. I’m really trying to spend most of my time at home so we have this special bonding time.”

Now there will be another person joining the already-large Kardashian clan.

And it’s not just the Kardashian family who is excited for their new addition. Many fans have been tweeting using #WELCOMEBABYBOYWEST. Here’s some of the best tweets:

He ain't even a day old & already richer than me. #WELCOMEBABYBOYWEST https://t.co/KtfECj9Sms

I JUST STARTED TEARING UP IM SO HAPPY AND EXCITED! WHAT A WONDERFUL BLESSING! #WELCOMEBABYBOYWEST ???