Kylie Jenner is following in the Kardashian footsteps as she poses in a risque photo shoot for Interview magazine, exposing her tush. Photographer Steven Klein did a photo shoot with Kyle, dressed in head-to-toe latex with her bare butt revealed in chaps.

Yesterday, Jenner launched her Lip Kit, which crashed the internet, and had a launch party at the family’s DASH store in West Hollywood while rocking green hair.

Check out all the pics from Kylie’s magazine spread below:

This is the most depressing @KylieJenner interview you will ever read: https://t.co/0cHUHB7D7F pic.twitter.com/yb5ncXux9N

.@KylieJenner leaves little to the imagination in her cover story feature for @InterviewMag! https://t.co/Jn305aKBbx pic.twitter.com/jlPdETwoXy

Kylie Jenner Wears Latex For Interview Cover Because Of Course She Does https://t.co/022JCPkJTD pic.twitter.com/LlKp1HnWOc 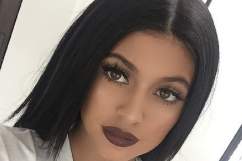