One of the stars of a VH1 reality show has been sentenced to eight years in federal prison for his role in a drug trafficking conspiracy.

Harris, 36, and his wife are part of the cast of Love and Hip Hop, New York.

1. He & His Brother Were Involved in a Heroin & Cocaine Trafficking Conspiracy for Several Years

Harris pleaded guilty in April to one count of narcotics conspiracy, according to court documents. His brother, Tyrus Harris, was also involved in the conspiracy, prosecutors say.

According to court documents, drugs, including large quantities of heroin and cocaine, were shipped to the Rochester, New York, area as part of the conspiracy.

The conspiracy was from 2005 to August 2012, court documents show. According to the Democrat & Chronicle, prosecutors said in court that shipments of two to five kilograms of cocaine and up to seven kilograms of heroin were moved to the Rochester area each year during that time.

The drug case ends the second legal battle in the past few years for Harris. He was found not guilty of sexually assaulting a teenage girl in New Jersey during a 2013 trial, the Cliffview Pilot reported.

2. The Money He Earns Through the TV Show Is Going to the Feds as Part of His Plea Deal

As part of his plea agreement, Harris has agreed to forfeit $2.5 million in assets, including the money he earns through his role on Love & Hip Hop, and speaking engagements.

According to CelebrityNetWorth.com, Harris and his wife, Yandy Smith, have a net worth of $15 million.

3. Harris Said He Has Been Trying to ‘Right His Wrongs’ Since Having Children

Harris told a judge on Tuesday that his children have helped him turn his life around.

“Ever since (having children), I’ve been trying to right my wrongs,” he said, according to the Democrat & Chronicle.

He has four children, including a 10-month-old daughter.

Harris also apologized during court. He told the Democrat & Chronicle that he took the plea deal to avoid a potential 20-year sentence that could have come with a guilty verdict after a trial.

Yandy Smith told the newspaper, “Now we have a definitive number and we can move forward. I know there is an end.”

4. His Wedding Was Featured on a VH1 Special in May

Harris and Yandy Smith were married Memorial Day weekend in Brooklyn. Their wedding was shown live on VH1.

5. The New Season of Love & Hip Hop Will Focus on the Time Leading Up to His Sentencing

The new season of Love & Hip Hop is set to debut on December 14.

According to previews of the season, the show will focus somewhat on the time leading up to Harris’ sentencing and how his family dealt with it. 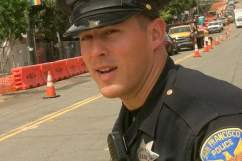