Miss Universe 2015 host Steve Harvey just made the biggest mistake in pageant history as he announced the wrong winner’s name. Poor Miss Colombia put on the crown, walked to the end of the stage and everything, but she was not the winner. Miss Philippines actually won.

About a minute after Miss Colombia was announced as the winner, Steve Harvey approached the front of the stage and said he had to make an announcement. He then revealed he had made a mistake and that Miss Philippines was actually the winner. The camera moved to Miss Philippines and Miss USA, showing the horror and upset on their faces in reaction to the blunder. Their upset was followed by happiness.

Seriously, though. It was an honest mistake from @IAmSteveHarvey. A BIG ONE. But still, don't crucify the guy. #MissUniverse2015

Poor Miss Colombia had to give back her crown and there’s a Twitter photo of it below.

That embarrassing moment when #SteveHarvey calls the wrong winner & u have to give ur crown back #MissUniverse2015 pic.twitter.com/jPySslHcCC

Steve Harvey felt horrible about the mistake he had made as he was so excited to host the event. He has since posted an apology on his Twitter account. You can view the tweet below.

The tweet was deleted soon after it was posted and more tweets were posted later.

It was a sad moment for all involved and it was clear that Miss Colombia and Miss Philippines had difficulty understanding what had happened. This created a very awkward few minutes on the stage. Harvey took control and showed the cameras the actual winners that were written, proving he did make a mistake. He also stated that he takes full responsibility for the error. He’s human and we all make mistakes.

Steve Harvey says "I will take responsibility. It is my mistake," holds up card showing he read wrong winner! #fox25 pic.twitter.com/vDg4tveExg

Here is more footage of the blunder in the two Twitter videos below: 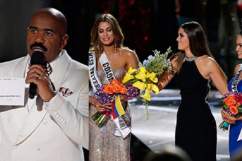