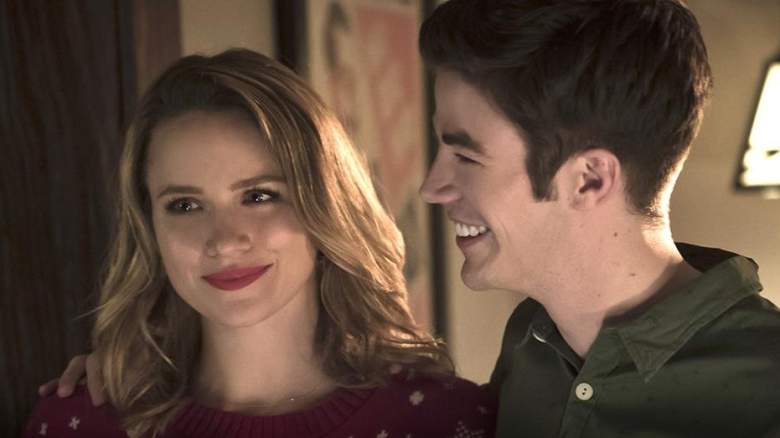 Things got a bit dramatic on winter finale of The Flash last week and the future of Barry’s relationship with Patty is up in the air. (Facebook)

The good news? There are plenty of spoilers to prep for the return of the CW superhero hit. The bad news? There’s a pretty long wait ahead of us. The Flash won’t return to TV until January 19 with the midseason premiere, titled “Potential Energy.” Before we delve into the second half season spoilers, check out the latest preview clip for the upcoming episode.

Alright. Now that we’ve been appropriately teased, let’s break down what spoilers we already know.

Zoom (voiced by Tony Todd) is back and just as evil as ever, kidnapping Patty (Shantel VanSanten) after Barry (Grant Gustin) receives a chilling warning from Earth-Two Wells (Tom Cavanagh). Oh, yeah, and Earth-Two Wells is now, apparently, in cahoots with Zoom.

Of course, this comes after viewers discovered that Wells figured out that Zoom keeps sending villains to Earth in an attempt to make Barry more powerful. That way, when the two finally face off, Zoom will be able to absorb as much power as possible. So, what are the chances that Patty survives being kidnapped and how might she react when she realizes the size of the secret Barry has been keeping. VanSanten told TVLine:

I would want Patty to be OK with it [if she finds out], because they can then work together, and after all they want the same things…any human might feel betrayed with not knowing somebody fully, after you’ve been dating them for a while. [But] I hope that Patty takes it in a good way and wants to be a part of the [Flash] team, too — for my own and for Patty reasons.

Meanwhile, the other important woman in Barry’s life, Iris (Candice Patton) will be dealing with her own relationship drama in the second half of the season. According to TVLine, the new year may lead to Iris’ first post-Eddie romance.

The CW is reportedly casting an African-American actor in his 20s to play Scott, Iris’ new boss at CCPN. Their relationship will get off to a rocky start after he immediately kills one of her pieces, but that might be just a set-up to bigger and better things.

The Flash will return to the CW on Tuesdays in January.

Grant Gustin, ‘The Flash’: The Pictures You Need to See

Read More
CW, The Flash, TV
Is the CW superhero drama on TV screens tonight? Read on to find out and check out all the latest spoilers for the rest of the season.