As seen in the teaser, The Young and the Restless returned Wednesday with some very important answers to some big questions.

After learning the truth about Ava’s situation and Luca’s (Miles Gaston Villueva) lies, Marisa (Sofia Pernas) makes a hard decision; one that’s surely to bother Noah (Robert Adamson). Jack (Peter Bergman) — who was made an offer by Adam (Justin Hartley) — continues disagreeing with his family over how to approach Victor’s (Eric Braeden) lawsuit. Unexpectedly, Kevin (Greg Rikaart) and his Internet activity will become involved in it too.

Adam reveals his exit strategy for Jack against Victor. Chelsea (Melissa Claire Egan) doesn’t see why Adam  would put Jack in the position against Victor or have him go against his brother, Billy (Burgess Jenkins). Jack refuses to go against his brother. Phyllis (Gina Tognoni) doesn’t think Billy would be sacrificed by Jack. Victor sits down with Ashley (Eileen Davidson), who wants to make a deal with him.

Mariah (Camyrn Grimes) thinks someone is lying about Marisa’s situation. Meanwhile, Marisa speaks to her daughter, Ava. Ava doesn’t know it’s her real mother. Marisa doesn’t reveal who she is, Jack won’t budge on selling out Billy. He almost put a fist through his face but will never turn him over to Victor Newman. Adam says Billy always bring everything back to Delia. Adam thinks Victor should get his way or he will destroy Jabot. Jack agrees to protect his family and Jabot. Jack vows to preserve it all. Ashley knows about what Victor did to Marco (Peter Bergman). Victor reveals that Jack has skeletons in his closet; death, explosions and more. Victor blackmails Ashley on it. Noah calls saying the Ava story isn’t adding up; Luca’s lying. He says that Ava isn’t from some poor and abusive family as Luca told her. Noah warns her to get away. The call dropped. Noah wants one more favor from Kevin.

Mariah doesn’t understand why Noah’s getting involved in Marisa’s situation. Kevin finds out that the Santoris are involved with an illegal arms dealer. Mariah warns Noah he’s messing with something dangerous. Adam says any hate he has for Billy is trumped by guilt over Delia’s death; it’s not personal. It’s for Chelsea since she almost married him. Chelsea defends Billy and compares the situation to Adam and Sage’s. Chelsea wants Adam to walk away from Victor since he can’t be hurt outside of prison. Ashley offers Victor $50 million to keep him from going after the Abbotts. Victor wants $500 million to make matters disappear.

Billy gives Jack credit for being loyal, but acknowledges Jack’s shortcomings. Billy refuses to appease Victor despite the Paragon predicament. Adam thinks he’s doing Billy a favor. Ashley tells Phyllis and Billy that he made Victor an offer. He disagrees and has another option but Jack won’t let him do it. Jack doesn’t think Victor will be satisfied trashing Billy. Jack wants to work out a better deal with Victor. Billy eggs Jack on to fight Victor. Luca denies he’s lying to Marisa about Ava’s lifestyle. After Marisa makes the case, Luca admits that he only brought Marisa to Spain to get her back. He’s been paying Ava’s tuition to her adoption family. Luca wants to make it right to by bringing his family back together. Marisa is confused.

Noah wonders why Victor went into business with Luca’s family. Victor warns him to stay out of it. Victor understands Noah wants to hang onto Marisa, but thinks she’s dangerous. Marisa meets Ava’s adopted mother, Carmen. Carmen knows Ava’s paperwork is illegal and Luca’s been secretly paying Ava’s tuition, but she’s begging Marissa to let her keep her. Marisa appears undecided. Kevin won’t reveal his amazing idea to Mariah. Billy doesn’t think anyone can reason with Victor. Ashley thinks Billy is the problem. Adam insists to Chelsea that he’s removing Billy from the fray; giving him his last chance to get his family back. Chelsea finally understands as they embrace.

Marisa tells Carmen why she initially let Ava go. Regardless, she enjoys seeing how happy Ava is. She came to take Ava back but can’t do it after seeing her life with Carmen. Victor tells Noah not to make the same mistake Billy did. Jack shows up trying to compromise with Victor reasoning that it will shake up both Newman Enterprises and Jabot. Jack tells Victor to “go to hell” after he tells him to take an early retirement. Luca is surprised but admires Marisa’s willingness to leave Ava with Carmen. Mariah insists she won’t spoil Kevin’s secret that he and the hacker found a way to restore privacy on the Internet, Billy overhears them. Billy informs Kevin that Victor will find out that Kevin was helping him, making him nervous. Ashley questions Phyllis’ loyalty to her husband. Jack challenges Victor, but Victor welcomes it.

Dr. Anderson (Elizabeth Bogush) continues her deceitful ways with Nick (Joshua Morrow), who must also deal with himself and Sage’s (Kelly Sullivan) relationship struggles. Speaking of romance, a love triangle appears to be forming as Lily (Christel Kalil) finds herself involved with both Joe (Scott Elrod) and Cane (Daniel Goddard).

Nick had some questions Dr. Anderson was able to put to rest. Her evil plan hasn’t been without its mishaps. However, she will now address Sharon’s (Sharon Case) life with her baby.

Dr. Anderson will query Sharon on her feelings for Dylan (Steve Burton) and the former’s take on her behavior. Sharon appears willing to return to Fairview and put its past behind her. She wants to put her focus on Dylan and baby Sully. Nonetheless, she appears irked by Dr. Anderson being around. 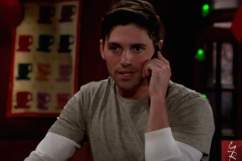 The Young and the Restless (Y&R) Spoilers: Marisa Lied to About Ava

Also, Nick continues to face resistance from Sage (Kelly Sullivan) as they quarrel again.Her confusion is making it hard for them to get back to where they were. According to Celeb Dirty Laundry, Nick begins packing things from Christian’s nursery.

It will bother Sage that Nick is trying to forget about Christian’s existence. The baby’s loss continues to form a wedge between them. 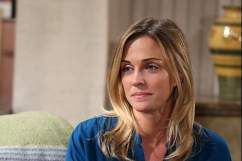 Lily Is Involved In A Love Triangle

Lily will find herself involved with two men — Joe and Cane — on Thursday’s Y&R episode. (CBS)

Meanwhile, the Lily and Joe pairing has piqued Cane’s interest. Cane informs Devon (Bryton James) that she has feelings for him despite sleeping with Joe; this would be detrimental to his marriage.

The Young and the Restless airs Monday through Thursday on CBS. Please be sure to check back with Heavy.com for all the latest updates.