Victor Newman (played by Eric Braeden), has been behind a slew of Y&R’s most mind-blowing moments throughout the years.

Since its debut broadcast on March 26, 1973, The Young and the Restless has had more than its fair share of over-the-top scenarios and situations — controversial storylines, character livelihoods being compromised, real-life meeting onscreen, to name a few.

While the popular soap was only no. 17 in the daytime TV ratings war to start, it eventually took the no. 1 spot from General Hospital during the 1988-1989 season.

Here are the moments you need to know about:

Jeanne Cooper & Her Character Katherine Get A Facelift

As the “heart and soul” of The Young and the Restless, Katherine Chancellor played an integral role on the long-running program. Played by the late Jeanne Cooper, the character was no stranger to hardship. She was a raving alcoholic, a widow to four husbands, and had her child given away after birth.

While Katherine’s predicaments were not ideal, it was Cooper’s bold move that made headlines. After personally deciding to undergo a facelift in 1984, the actress convinced Y&R executives on writing the medical procedure into Katherine’s storyline. The decision instantly made Cooper a pioneer in the television industry

At the 2:10 mark in the video above, Katherine is shown going under the knife. Following the plastic surgery, Katherine — appearing to have just woken — gets her padding and bandages removed by the doctor, who explains the results that she (and Cooper) could expect:

“How you look today has nothing to do at all with how you’ll look in three weeks,” said the doctor.

In 2012, Cooper spoke on The Talk about just how real the onscreen TV situation was for her:

“Everything that happened in that storyline was first-hand, Cooper said. “And you saw everything as I saw it.

According to BBC, Cooper also spoke about all the positivity she’s received pertaining to the procedure:

It opened up reconstructive surgery for so many people, youngsters getting it done. To this day, people will come up to me and say, ‘Thank you so much for doing that. My mom or I had something done and not just cosmetic surgery.’ That was an incredible experience in my life.

The Young and the Restless Explodes In Out of the Ashes

Pictured in the video above, The Clear Springs 2007 building collapse that left several Y&R main characters trapped beneath rubble. (YouTube)

Following the construction of resort and casino in Clear Springs, an explosion occurred causing the facility’s collapse. This resulted in the injuries of several cast members. It also was the catalyst for unlikely alliances between friends, foes.

During the ordeal, the following characters were trapped inside the rubble: 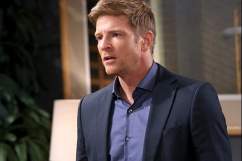 During a storyline that was controversial for its time, Katherine Chancellor (pictured above) developed feelings for her female friend Joanne Curtis. (CBS)

Feeling lonely and vulnerable from her husband Phillip Chancellor II’s death, Katherine developed feelings for her friend/roommate Joanne Curtis — the latter moved in following a divorce. Katherine — known as Kay — became possessive over Joanne, touching her hand at one point.

During a time period where gay story arcs weren’t as widely used as they are today, The Young and the Restless producers ultimately decided to experiment with a Kay-Joanne romance.

In 2009, Cooper spoke to Soap Opera Network about the storyline — although it never quite took off, the actress felt it wasn’t something that was sensible for Katherine.

“I don’t believe that Kay’s fling with Joann needed to be mentioned because there was no real story development.”

Sally McGuire (Lee Crawford), pictured above, took matters with Snapper Foster into her own hands by skipping out on her birth control pills. (CBS Screenshot)

From 1973 to 2003, William Grey Espy appeared as Snapper Foster — an M.D. who enjoyed the bachelor lifestyle — on Y&R (William Grey Espy also had the role. That was until one of his flings — Sally McGuire, who fell in love with Snapper — skipped out on her birth control pills and became pregnant with his baby.

Snapper ended things with Sally, who informed her boss Pierre Roulland about her pregnancy. Since he was in love with her, the two ended up tying the knot. Pierre even offered to give the baby his name.

Things didn’t go as smoothly for Snapper, who was dating Chris Brooks. She broke up with him after her father informed her about his infidelity. A long-while later, Chris accepted Snapper’s proposal and the two got married in 1974. Baywatch’s David Hasselhoff played Snapper from 1975 to 1982.

Victor Newman Forces His Wife’s Lover Watch Them Having Sex

Victor Newman — holding Michael Scott hostage in 1981 at the 1:38 to 2:11 mark in the video above — has built himself a reputation as Y&R’s main antagonist.

Known as The Young and the Restless’ main antagonist’s today, Victor Newman has a penchant for trouble — 1981 was no different. Looking to teach his wife Julia’s lover, Scott, a lesson, Victor holds him captive inside the Newman Ranch Bomb Shelter (in the video above at the 1:39 mark). Victor later forces Michael to watch the former and his wife make love on closed circuit TV.

Julia initially took a job modeling for Michael, a photographer. This led to the two sleeping together while Victor was away. Victor began taping Michael and Julia’s conversations when he first became suspicious.

Julia ended up pregnant and Victor felt it was Michael’s baby. Victor occasionally fed the kidnapped Michael, including a dead rat. Julia ended up miscarrying and the baby turned out to be Victor’s. Her and Michael ended up separately leaving Genoa City.