Victor Newman (Eric Braeden) will have his hands full on Monday’s all-new episode of The Young and the Restless. Y&R’s main antagonist won’t only want Abby (Melissa Ordway) to hold off on marrying Stitch (Sean Carrington), but also have payback brewing from Jack (Peter Bergman).

Here’s what you need to know for Monday’s Y&R spoilers:

Ashley Abbott — who’s love for Stitch is mutual — is looking to speed up his wedding to Abby to get over it. (CBS Screenshot)

As shown in the footage, Ashley (Eileen Davidson) will want an Abby and Stitch marriage to be expedited. Celeb Dirty Laundry reported that this may be because “she feels that she’ll be able to put her feelings for Stitch behind her” more effectively. The dynamic between Stich and Ashley has been anything but stress-free since they professes their love for each other during the fire.

Victor will suggest that the two not rush into a winter holy union, but instead wait till spring.

“Would you consider postponing it? You know, spring time would be better now.”

“Absolutely not. You’re not postponing your wedding.”

Unfortunately for Abby, Stitch will be coming clean fairly soon on his feelings for Ashley, according to CDL. 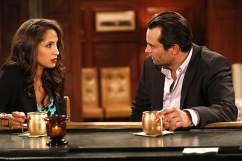 The Young and the Restless (Y&R) Spoilers: Lily’s Fate Revealed

Jack Gets More Aggressive Against Victor

Jack is now ready to take the gloves against Victor off in the lawsuit between the Newman Enterprises and Jabot. (CBS Screenshot)

Jack continues to become more aggressive after being motivated by Billy (Burgess Jenkins) to fight back against Victor. Initially, Jack didn’t believe he — or the Abbotts — had a shot at defeating Victor in court.

On Monday, Jack will recruit Michael (Christian LeBlanc) to aid him in the legal battle against Victor.

“I’m going to expose Victor for everything he did at a press conference today.”

Michael will also be caught off guard after learning about the Marco Annicelli (Peter Baldwin) situation. Michael will be legitimately concerned about Jack’s well-being if he were to seek revenge. Jack will think he was drugged when he killed Kelly Andrews (Cady McCain) — whom mentally, physically and sexually tortured him — which could get him off.

The Young and the Restless airs Monday thru Friday at 12:30pm ET on CBS. Be sure to check back with Heavy for all of the latest spoilers. 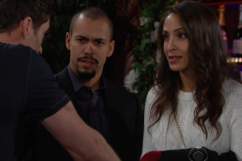 The Young and the Restless (Y&R) Spoilers: Lily in Trouble