The Young and the Restless returned on Tuesday with an all-new episode as Victor (Eric Braeden) raised demands on Newman employees while Phyllis (Gina Tognoni) continued trying to clear the riff between Billy (Burgess Jenkins) and Jack (Peter Bergman).

Read on for Tuesday’s episode recap and head to the next page for Wednesday’s Y&R spoilers:

Despite the holiday season looming, Victor is adamant about restoring Newman to its pinnacle. (CBS Screenshot)

Abby (Melissa Ordway) thinks Victoria (Amelia Heinle) shouldn’t let Billy spend the holidays alone. Victoria says it’s on Billy for spending the holidays repeatedly turning to booze. Victoria and Abby are shocked to see Noah (Robert Adamson) back at Newman. He says he’s helping Victor rebuild his company since he’s no longer with Marisa (Sofia Pernas). Victor wants them working hard until Newman is back on top. Noah calls Adam in for Victor. Adam says he’s with his family. Later, Abby and Victoria continue working while Victor compliments Noah on not complaining about it. Nikki (Melody Thomas Scott) shows and tells Victor he shouldn’t overwork them during Christmas.

Abby and Victoria update Victor after a long day of work. They both have things to do, but Victor says, as executives, they must be there. Abby expresses her opinion on the workload. Victor says she can go work for Jabot if she don’t like it. Noah defends her. The lights periodically go out. Nikki thinks it’s a sign, but Victor says it’s a renovation. Nikki informs Victor about a Christmas gathering. He’d rather stay at work to rebuild Newman. Nikki says Victor should be grateful they survived in the Newman Tower fires. They quarrel over it. Adam shows and asks where everyone is. If nobody wants to help Victor, he says he’ll rebuild his company himself.

Later, Nikki tells Abby and Victoria not to let Victor take over their life. Abby feels guilty that her and Stitch (Sean Carrington) are getting married while everyone else is going through tougher times. Victoria and Nikki insist she don’t have to.

Adam (Justin Hartley) tells Victor to ease up on employees and not work himself to the ground. Victor says people depend on him so he can’t afford to not succeed. Chelsea (Melissa Claire Egan) shows up with Connor, who shows love to Victor. Chelsea insists Adam go home with him; Victor okays it. Later, Chelsea tells Adam’s she thinks he’s been a little off. Adam says Victor opened up to him about the importance of rebuilding Newman. Adam thinks Victor needs him whether he admits it or not. Victor seems overwhelmed. He looks at Newman family pictures and is motivated to get back to work. 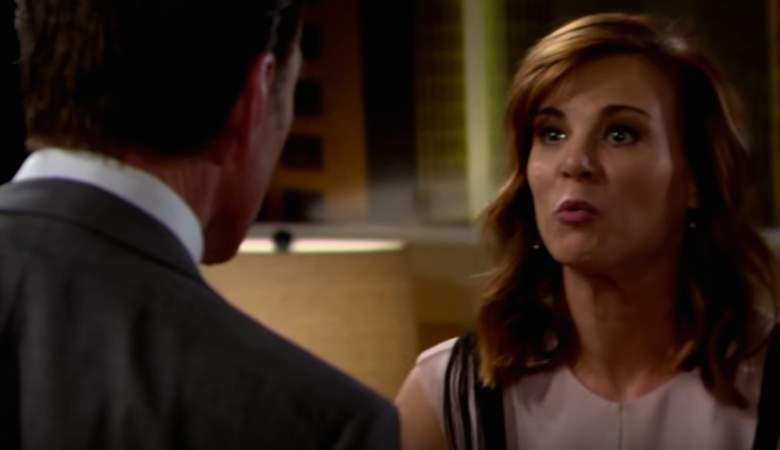 Phyllis tells Jack that nobody is leaving until him and Billy work things out. Billy and Jack quarrel over what Billy did to Jabot. Phyllis won’t let Billy leave as Jack continues insulting him. Billy locates a back door and exits. Later, Phyllis and Jack continue disagreeing about Billy. Jack wishes Billy would take responsibility for his actions; he’s been doing it his entire life. Jack says this time is worse; he screwed things up for many employees at Jabot. Jack won’t cut Billy out of his life, but will cut him off from his bank account. Phyllis insists Jack is all Billy’s got. Jack found Billy. He asks him if he’s trying to kill himself. Jack hasn’t seen Billy like this since Delia died. Billy is a mess. He blames the anger, pain and sorrow on Adam returning. Billy says he can’t handle life anymore, but he won’t do anything stupid since he has kids in the picture. Jack says Katie (Reese and Kennedy Staib) and Johnny (Holden and Ryan Hare) deserve better. His tension with Victoria isn’t good for them. Phyllis says Jack forgave her and he do the same for Billy. Billy tells Jack he’ll give success everything he’s got.

Chelsea is Concerned About Adam’s Inclination for Victor

Chelsea — pictured above talking to Adam (offscreen) — is concerned about her husband’s obedience towards Victor. (CBS Screenshot)

Chelsea is taking Connor to see Santa. Adam wants to come; he cleared the day for them.
Meanwhile, Dylan, Sharon and Faith mull over her Christmas list. Nikki joins and gives Faith an early gift. Faith wants Sully’s first Christmas to be special. Nikki is hesitant on a gathering, but says she’ll make time for a party if Victor okays it. This makes Faith happy. Chelsea and Adam join them. Adam is left alone with Sharon; it’s awkward. She admits to a funny feeling when she met him as Gabriel. He explains he would’ve admitted who he was if he could. She agrees.

Adam says Sharon is lucky to have Sully.Sharon is surprised by Adam’s soft spot. He’s glad everything worked out for her at Fairview. She’s glad everything’s working out with his family. Noah informs him that everyone else is there working extra. Adam bails on Santa plans. Adam isn’t Dylan’s favorite person, but he’s happy as long as Chelsea and the children are. Chelsea notices a peace about Dylan that he never had. He thinks sometimes it seems too good to be true. Sharon asks Dylan what his intense convo with Chelsea was about. Dylan says Sully gave them both a second chance. Sharon says Dylan saved her too. Chelsea tells Sharon she has faith in Adam despite knowing Victor won’t change. Santa shows, putting a smile on Sharon and Dylan’s (Steve Burton) face.

SPOILER ALERT: The NEXT PAGE features The Young and the Restless Spoilers for Wednesday, December 23, 2015.