On tonight’s grand finale of The Voice 2015, the official winner was named, but first we found out who did not make it through. The artist announced in fourth place was Jeffery Austin, followed by Barrett Baber, who was in third place. This left Jordan Smith and Emily Ann Roberts … And the winner is … JORDAN SMITH!

The night kicked off with the top 24 contestants giving a huge performance together, which set the tone for the entire night … It was a time to reminisce about this past season with outtakes, skits, previous performances and memories. In addition, several A-list celebrities and music legends joined the contestants on stage for duets as well as solo performances. The most memorable highlight of the night was Jordan Smith’s performance of “Without You” opposite superstar Usher. And, of course, the crowd went crazy for Justin Bieber, who performed his song “Sorry”, who started off his set by playing the piano as he sang along. The Biebs then moved into a more upbeat version of his song, accompanied by back up dancers.

Aside from all the celebrity performances, there were many collaborations on stage among the contestants. Each of the top 4 finalists chose two cast-offs to perform with them for a song, which was a nice and sentimental moment for each performer.

The Season 9 Winner of #TheVoice is… pic.twitter.com/uaL7sMEP28 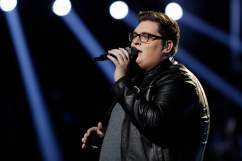 Read More
Reality TV, The Voice, TV
Who won season 9 of The Voice tonight? Get the 2015 winner results right here.