Actor Alan Rickman, who died Thursday at the age of 69 after a battle with cancer, is survived by his childhood sweetheart, Rima Horton.

Horton, 68, was Rickman’s first girlfriend. The British actor, known for his roles as Hans Gruber in Die Hard and Severus Snape in the Harry Potter series, lived a mostly private life despite his stardom.

Here’s what you need to know about Horton and Rickman:

1. The Couple Met When They Were Teenagers & Dated for More Than 40 Years

Alan Rickman and Rima Horton met in 1965, when he was 19 and she was 18. They met while they were both studying at the Chelsea School of Art, according to The Scotsman.

She was also involved in theater. The couple acted together in amateur dramas, before Rickman was accepted into the Royal Academy of Dramatic Art.

Horton, one of three children, was born in Bayswater, London.

Despite Rickman’s stardom, the couple managed to live a quiet life.

“I think every relationship should be allowed to have its own rules,” Rickman told Hello Magazine. “She’s tolerant. She’s incredibly tolerant. Unbelievably tolerant. Possibly a candidate for sainthood.” 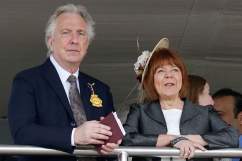 Rima Horton, Alan Rickman’s Wife: Together Over the Years

Though the couple dated for several decades and began living together in 1977, they did not marry until 2012. They were wed in a quiet ceremony in New York City.

Rickman and Horton kept their marriage secret until an April 2015 interview.

“We are married, just recently. It was great, because no one was there,” Rickman told the German newspaper Bild. “After the wedding in New York we walked across the Brooklyn Bridge and ate lunch.”

He joked that he bought his new wife a $200 ring “that she never wears.”

Rickman said the secret to their relationship is that they make each other laugh.

3. Horton Was an Economics Lecturer & a Labour Party Politician

While Rickman pursued a career in acting, Horton shifted her focus toward economics and eventually politics. She worked as an economics lecturer at Kingston University.

From 1986 until 2006 she was a councillor for the Kensington and Chelsea London Borough Council, representing the Labour Party. Rickman was also a member of the party and both were heavily involved in politics.

She lost her seat in 2006, Rickman told The Scotsman during an interview that year.

“She was part of the national shift, so she’s a free woman – a dangerous thought,” he told the newspaper with a smile. 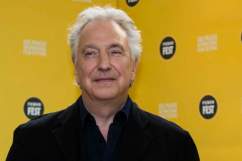 Alan Rickman on Netflix: Movies You Can Watch Right Now

4. She & Rickman Decided Not to Have Children

Rima Horton and Rickman never had children. He said he would have liked to have had a family, but they decided against it.

“You should remember I am not the only one involved. There is another person here,” Rickman once said. “I would have loved a family. Sometimes I think that in an ideal world, three children, aged 12, 10 and eight, would be dropped on us and we would be great parents for that family.”

5. Condolences Have Been Passed on to Horton From Around the World

Celebrities and fans have passed on condolences to Horton from around the world.

“My thoughts are with Rima and the rest of Alan’s family,” Harry Potter author J.K. Rowling said on Twitter. “We have all lost a great talent. They have lost part of their hearts.”

There are no words to express how shocked and devastated I am to hear of Alan Rickman's death. He was a magnificent actor & a wonderful man.

Many on Twitter also marveled at their remarkable relationship:

Alan Rickman met Rima Horton when he was 19 and she was 18. They've been together ever since. How devastating. Fifty years together.

Alan Rickman & Rima Horton have been together since they met when he was 19 and she was 18. Five decades of love? We should all be so lucky.

Had dinner with #AlanRickman, #RimaHorton and @ThatKevinSmith in London years ago. What a wonderful couple. What a loss for her, and for us.