Alexandria “Lexi” Zahra Jones is the daughter of the late David Bowie and his supermodel wife Iman. She was born in August 2000 and has two siblings — half-brother Duncan Jones, from Bowie’s marriage to Angela Bowie, and half-sister Zulekha Haywood, the daughter of Iman from her marriage to Spencer Haywood.

Alexandria was born over two decades younger than Zulekha Haywood and was considered Iman and Bowie’s miracle baby. Iman had tried IVF to get pregnant, but it was unsuccessful. The couple were considering adoption when they found out Iman was expecting a child.

Alexandra Jones keeps a pretty private life, away from the paparazzi as she is only a teenager. Bowie and Iman first introduced their daughter publicly to the world via a photo shoot with Hello! Magazine. The shoot took place in the couple’s New York apartment, overlooking Central Park. Iman told Hello! that the birth of their daughter brought the couple even closer, explaining that:

We’ve always been very close, but if it’s possible we’ve been drawn even closer. There’s a joy or a contentment that’s almost palpable to both of us. Overnight, our lives have been enriched beyond belief.

In 2013, when Bowie was possibly going on tour, Iman said that she couldn’t accompany him because their daughter had school. Iman told Daily Mail:

We have a 12-year-old in school, so we are stuck, we can’t travel. Our schedule is around her, so I don’t know. We’ll have to go visit him, but we won’t be on tour with him because she’s in school.

They were just like regular parents … who just happened to be global icons.

Below are some more photos of Bowie’s daughter as a baby and growing up.

I'm so glad David Bowie had all this before he passed. His daughter is 15 now. pic.twitter.com/HEecL54xxn 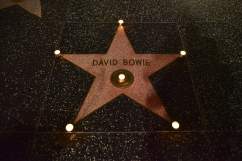