Billions returns on Sunday with an all-new episode as Chuck (Paul Giamatti) continues plotting a way to deceive Bobby (Damian Lewis) and Axe Capital while Lara (Malin Ackerman) gets wind of a friend that’s publishing a 9/11 memoir that could seriously damage the Axelrods’ reputation.

Axe Continues to Cover His Tracks 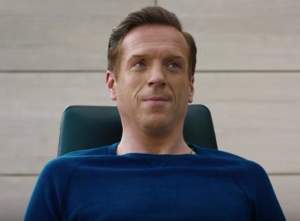 Chuck is the best of the best when it comes to taking down corrupt financial bigwigs. With a flawless 81-0 record, the U.S. Attorney for the Southern District is hesitant on acting too quick against Axe. Making matters more complex, he’s got to deal with the fact that his wife, Wendy (Maggie Siff), is Bobby’s in-house performance coach.

On Sunday, Chuck continues to be calculated in his efforts to take down Axe and his sneakingly shady team at Axe Capital.

“We apply pressure when and where we can.”

Later, Chuck acknowledges that he must act accordingly before he makes a bold move on Bobby.

“It looks like the race is on to see who’s got the stronger information.”

“He’s sending you a message. Bury the son of a bitch.”

Axelrod’s righthand man, Wags (David Costabile), has Bobby’s back on all fronts, seeming to hold something over a disgruntled ex-employee.

“You cannot leverage us.”

Meanwhile, Bobby — who hired his own in-house SEC practices team — continues giving the impression that all his dealings are legally legit.

“I’m not here as a declaration of war, but as a beacon of hope.”

Will Chuck make leeway on his quest to take down Axelrod, or will the head of Axe Capital continue to beat the system?

Lara Gets Wind of a Potentially Damaging 9/11 Memoir 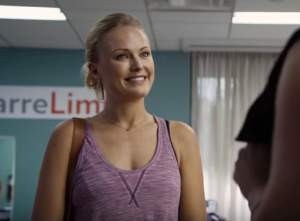 Lara — pictured in Sunday’s Billions episode — finds out about a potential damaging memoir on 9/11. (Showtime Screenshot)

At the gym, Lara is informed that a friend is penning a memoir on 9/11.

June justifies her book — which is a sensitive topic for Bobby since he’s a 9/11 survivor — to Lara.

“It’s just a story I wanted to tell.”

Lara — playing the memoir aloof — is curious as to what June wrote.

Later, she’s informed that there’s an issue with one of the sections of the book

Has June bit off more than she can chew with

Showtime’s Billions airs on Showtime on Sundays at 10pm ET. Be sure to check back with Heavy for all its latest spoilers and updates.