Charlotte DiLaurentis dies on the premiere episode of Pretty Little Liars. After the girls testify before a judge, trying to decide whether or not Charlotte should be released, Charlotte is, in fact, set free. She goes home with Ali and the next morning winds up dead. It appears as though she committed suicide, but we PLL fans know better … especially since her body was found with a rose in her hand. After a homicide, the police figure out that Charlotte was dead before she was thrown from the bell tower. And so, the PLL girls are instructed not to leave town.

It'd be weird to have to act dead in a to show. Like you have to lay in a casket #PrettyLittleLiars @PLLTVSeries pic.twitter.com/2FYjzPxPtO

There is a new villain this season who is connected to one of the girls. Is it possible that the new villain killed Charlotte? Or, could one of our favorite characters have something to do with her death?

Earlier in the episode, Alison revealed that she had been helping care for Charlotte (Cece) while she was locked up. She pleaded with the other girls to help her get Charlotte released. Below see a photo of Alison visiting Charlotte. 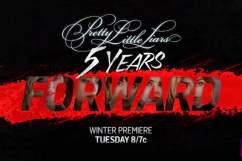