Ricky Gervais hosts the 2016 Golden Globes once again and he, of course, carried out some zingers. It was even revealed on the E! red carpet that there were about 10 jokes he was banned from doing at the awards show. Gervais started out by coming onto the stage with a beer and told the audience to shut up. He told them they were all disgusting pill-poppers and then said that he would deliver the opening monologue … and then immediately go into hiding. He made a joke about change and then brought up Caitlyn Jenner, saying she did so much for the transgender community … but not for female drivers. Gervais said that he has been warned about pushing boundaries with his jokes on stage and he said that was a challenge he couldn’t resist taking on …

Gervais then started poking fun about the nominees and also talked about film companies actually paying for their Golden Globe Awards for their actors. Ouch.

He made fun of women’s equality when it comes to Hollywood paychecks. Gervais also talked about all the female remakes of films like Ghostbusters and said that they are sure box office hits that are great for the studios because they don’t have to pay the cast as much money.

Gervais also talked about his three Golden Globe awards at home, one of which he says he likes to shove up his ass in bed. 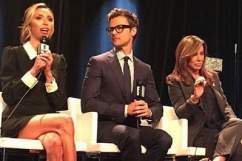 E! Red Carpet – Golden Globes 2016: Everything You Need to Know