Joelle “JoJo” Fletcher is a Dallas native who can now add Bachelor contestant to her resume. Check out the details on JoJo below and beware of some major spoilers.

1. Fletcher Gets the First Group Date Rose of the Season

TONIGHT is the night! Tune in to @bachelorabc at 8/7c! You only have one chance to make a first impression ;) ??? #unicornsarereal #couldntseeanything

For the first group date on The Bachelor this season, Ben Higgins takes the girls to a high school for some challenges. The girls have to participate in jumping hurdles, science experiments, bobbing for apples and more. Unfortunately for Fletcher, she did not win the challenge. Mandi Kremer actually won. However, Kremer did not get the group date Rose. Fletcher was awarded the group date rose at the after-party. 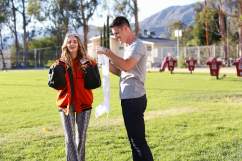 2. She Has Her Own Real Estate Company

"I don't know what to do with my hands" #rickybobby #winteriscoming ??❄️

Fletcher graduated from Baylor University in Waco, Texas and she’s quite accomplished as she started her own real estate development company named JHF Realty Development.

3. Her Brother Ben Is a Reality Star

Life without these two would be nothing. So thankful to have the best brothers in the world! @benpatton @mb_patton

It looks like Fletcher isn’t the only reality star in the family. Her brother, Ben Patton, was one of the bachelors on the show Ready for Love. Ben starred alongside Tim Lopez and Ernesto Arguello. In fact, JoJo Fletcher was seen on an episode of the show when Ben brought several ladies home to meet his family.

4. Fletcher Is Not the Winner This Season

?'s outta the bag – Excited to finally be able to share! Tune in to ABC Monday, Jan 4th to see where this amazing adventure takes me. ❤️#bachelornation #thebachelor ?

On the show this season, it is Lauren Bushnell who is the winner of Ben Higgins’ heart, according to Reality Steve. She does, however, reportedly make it to the final two, which means it was between her and Bushnell.

Margarita ball with the two I love the most! @benpatton @mb_patton

According to The Inquisitr, Fletcher has a couple Bachelor connections. For one, former star Jake Pavelka went to school with Fletcher’s brothers. Plus, JoJo’s brother and Jamie Otis, who was on Ben Flajnik’s season and went on to be on Married at First Sight, are reported to have had a short relationship.