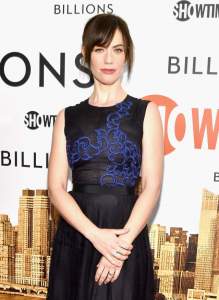 A household name in the world of TV, actress Maggie Siff, 41, first got her start in 2004 on FX’s Rescue Me as an AA speaker. She then starred in Sons of Anarchy as hospital surgeon-turned Jax Teller’s (Charlie Hunnam) old lady, Tara Knowles, and one of Don Draper’s (Jon Hamm) muses on Mad Men as Rachel Menken-Katz.

Although Siff has a career that speaks for itself, she’s still managed to keep her personal life under wraps. She’s pictured above at the New York Museum of Modern Art on January 7 for the Billions premiere.

Heres what you need to know:

1. She Had a Baby Girl With Husband Paul Ratliff

Although Siff’s SOA character lied about her pregnancy and faked a miscarriage, she embraced the news of motherhood in her own life while expecting. Her daughter, Lucy, was born on April 14, 2014. While her twitter account has since been taken down, she initially announced Lucy’s birth on the social media site.

On October 28, 2013, Siff spoke to E! Online about how she felt, having to balance her pregnancy with her then Sons of Anarchy shooting schedule.

“I’m past the nausea so I’m feeling a lot better, a lot more energetic. We just finished shooting the season, which is good.”

Like a typical woman that was expecting, Siff admitted to the site that she had her fair share of cravings. She wanted “a bit of ice cream…nothing too much. Yogurt [and] dairy.”

On October 27, 2013, Siff spoke highly to Daily Mail about her husband, Paul Ratliff, and how she thought he would fare as a father.

“He is very very sweet and fun so he plays a lot of games and he will just make the baby laugh a lot.”

2. She Was Born & Raised in the Bronx

If you wanted to get maggie a xmas gift this year, a great thing to get her is to pledge to the a woman, a part kickstarter campaign. Without our support we cant get the movie out in to the world! Lets do this guys. Link is in my bio. Oh and merry Christmas and happy holidays. Love you all! #madmen #maggiesiff #awomanapart #awapfilm #taraknowles #jaxandtara #sonsofanarchy #billions #showtime #fifthwave

Siff — pictured above in the New York-based Indie, A Woman, A Part — identifies as “half Jewish,” according to The Bronx Times on January 26. She was born and raised in the Bronx, New York. Siff graduated from the Bronx High School of Science. She then attended Bryn Mawr College — an women’s college in Bryn Mawr, Pennsylvania — where she majored in English. From there, Siff returned to New York, to receive her Master of Fine Arts in acting at the NYU Tisch School of the Arts.

Siff primarily worked in regional theater prior to breaking into TV. In 1998, she nabbed The Barrymore Award for Excellence in Theater — a Philadelphia-area theater honor — for her acting in Ghosts at Lantern Theater Company.

Siff — who’s Billions character has an inclination for S&M — was initially apprehensive about channeling the naughty side of the psychiatrist since she “has always prided hersef on staying away from nudity for nudity’s sake,” according to The Week on January, 21.

However, once she spoke to the showrunners and Paul Giammatti (Chuck Rhoades), her onscreen husband, her reservations instantly went out the door.

“I think people sometimes say, ‘Oh, that’s Showtime being naughty or trying to be risque.’ I really think none of us wanted to feel like a cliche. There’s certainly some humor in it. Our intention is not to shock and awe. Our intention is to add another interesting dimension to a relationship.”

Siff — who’s small screen body of work speaks for itself — also dished on the breadth and depth of her Billions female character.

“It was so smart and the character was so multi-dimensional on the page,” she says. “You don’t usually read roles where the female characters who are supporting characters are so multidimensional — especially in a pilot script.”

4. She Has a Song on the ‘Sons of Anarchy’ Volume 3 Soundtrack

For season six episode 9 of Sons of Anarchy, Siff tried her hand at singing. The song, titled Lullaby for a Soldier, was performed by the actress to translate a powerful mother-to-son message, as creator Kurt Sutter explained to Rolling Stone on November 4, 2013.

“We wanted a song to convey the pain of a mother losing a son. Bob and Dylan created a beautiful lullaby, sung by the beautiful Maggie Siff.”

Sons of Anarchy music supervisor and composer, Bob Thiele Jr., boasted to the site about Siff’s voice, adding that he didn’t want it to be overshadowed by any instruments.

“I didn’t know what to expect when Maggie came over to the studio. She said rather humbly that she ‘could sing.’ As you can hear for yourself, Maggie has a beautiful, captivating voice. For the actual track, I felt that any instrumental accompaniment should be minimal. Even a small acoustic guitar seemed to distract from emotional tone of her performance. I wanted nothing to interfere with the power of her vocal.”

5. She Has an Estimated Net Worth of $6 Million

According to Celebrities Money, Siff’s estimated net worth is at $6 million. The respective amount accounts for both her movie and TV roles.

The site reported that she earns a yearly salary of $727,273, most notable making $500,000 for the Stacie Passon-directed Concussion; not to be confused with the Will Smith movie.

In season one of Sons of Anarchy: The Ink, she reportedly raked in $375,000 and also made $342,857 for her role in Adam Sandler’s Funny People, amongst other notables.