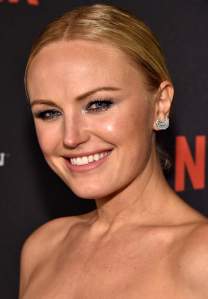 At 18 years in the entertainment industry, Akerman, 36, is a veteran thespian by most people’s standards. However, there’s a helluva lot more to the Swedish-Canadian beauty. She’s pictured above at The Weinstein Company and Netflix Golden Globe party on January 10.

1.She’s Focused on Being A Single Mother

Spent Easter with my most special person. He was more interested in mommy than chocolates…gonna enjoy these moments while they last! Hope you all had a beautiful day. #easter #love

Akerman divorced from her son Sebastian’s father, Roberto Zincone, in 2013. Their separation was announced on November 25, 2013. The two met in 2003 when the actress was the lead singer for The Petalstones. They married in Italy on June 20, 2007. Zincone was the band’s drummer. Zincone couldn’t speak any English at the time. Hence, the two interacted via dictionary.

At the premiere for her movie I’ll See You in My Dreams, Akerman spoke to PEOPLE about Sebastian — born on April 16, 2013 — and his comedic chops.

“Man, he’s got a sense of humor. He’s trying to pull jokes. He’ll do silly things, then look at me and say, ‘What? That’s crazy!’ That’s been real fun.”

Since splitting from Zincone, Akerman has been focusing on herself and Sebastian. While Akerman still dates — she was previously linked to actor Colin Egglesfield — she confessed that she’s not looking to settle down anytime soon.

“Essentially, I’ve had a really nice year of self-love, not to sound cheesy,” Akerman says. “Getting in touch with me and my son and being a mom and meeting new people.”

2.She Had a Brief Music Career

Alongside her ex-husband, Zincone, Akerman — pictured above during a music video performance of Poison — once had musical aspirations. Upon moving to LA to broaden her acting horizons, she met film editor Francesco Sondelli, who was doing editing work for The Utopian Society, a film she had a small part in. Sondelli later asked Akerman to provide song lyrics for his rocker band, Ozono.

The group eventually changed their name to The Petalstones and she became their lead singer. Their first album, Stung, was released in August 2005. Ultimately, Akerman decided that music wasn’t in the cards for her. She told Daily Mail on February 28, 2009 that she “actually can’t sing,” and would rather focus on acting.

While promoting the movie Rock of All Ages, Akerman — who played Constance Sack — shamelessly told the Winnipeg Free Press on June 14, 2012 what her vocals primarily consisted of.

3.She Suffers From Dyslexia

Fresh air, blue skies and a little sunshine– I’ve got all I need. Just by recycling, you can help @PepsiRecycling and @nature_org protect those moments in nature that we treasure. Share your nature photos and why you #RecycleforNature! #ad

While interviewing with Movieline on September 23, 2010 for the limited released flick, The Romantics — also starring Josh Duhamel and Katie Holmes — Akerman said that she always had trouble memorizing her lines. More specifically she admitted to suffering from dyslexia.

“I’m highly dyslexic, so it takes me a long time to learn lines. I get horrified when I have to do table reads with the whole cast, because there’s a lot of stuttering coming from me, so I have to do a lot of prep. Whenever there’s improv, I’m like, ‘Great! No lines.’ It’s so funny, because you do get directors who are more adamant about the words — especially writer-directors. They want the words to be precise. And I do end up changing words, and it doesn’t make sense, and I understand why they want me to say the words because I switch sentences up. It’s just the dyslexia that comes in.”

4.She Embraces Nudity in Film

#tbt to the very naked cover of Abercrombie circa 2002 (?) w none other than Mr Grey himself @jamiedornan #50shadesofgrey #nakedisthebestwaytosellclothes ?!

Admittedly, Akerman — pictured above during an Abercrombie & Fitch photo shoot with Jamie Dornan (L) — isn’t a fan of playing the stereotypical trophy wife, as she stated her mesmerizing looks were both “a blessing and a curse.” She’s always wanted more “interesting, meaty roles.”

However, she’s also not opposed to going nude, if cinema portrays reality. She’s bared her body in 2004’s Harold & Kumar Go to White Castle and again in 2012 for Wanderlust.

Akerman told Daily Mail on February 28, 2009, that taking her clothes off sometimes comes with the territory.

“I’m not embarrassed about taking off my clothes for a film. I don’t
know many women who have sex with a bra on. So let’s make it real
in the movies”

5.She Has an Estimated Net Worth of 10 Million

According to Celebrities Money, Akerman rakes in an annual salary of $1.2 million and has an estimated net worth of $10 million.

On January 8, Akerman let AOL in on the best piece of financial advice she’s ever received.

“Empty your pockets in order to fill them again. Instead of holding onto things too tightly, I think it’s more like enjoy life, and spend it and spend it wisely, but you have to give to get back.”