Tonight on a very special episode or #RHOA I journey back to my hometown of #Detroit with my father to confront my mother which has been 40 years over due. This is was one of the hardest things I've ever had to do in my life. But I finally got what I needed from my family. Tonight on @bravo at 8pm #bravo #familyisforever

On Real Housewives of Atlanta, we’ve seen Kenya Moore talk to her father Ronald Grant about her mother Patricia Moore, who has been absent from her life. Kenya has pain in her heart over the relationship she has and doesn’t have with her parents. Kenya Moore’s parents were both teenagers when they had her in Detroit, Michigan, so it was a difficult situation. In turn, Kenya ended up being raised by her paternal grandmother and aunt after her mother abandoned her at birth. Kenya Moore once revealed to Bravo that her mother never even named her, confessing that:

Since birth, my mother made the decision at age 16 to pretend she never had me. She has never spoken to me. Even if present in the same room with other people and family, she pretends that I simply don’t exist. She pretends I’m invisible.

According to Lipstick Alley, they report that:

In 1993 Patricia claimed, “the door for communication has been and always will remain open”, she has not apologized as Kenya demands. Apparently there were problems before Kenya was born. Patricia declines to discuss the details of the estrangement. “I’m a very private person. It doesn’t matter how dim Kenya portrays me, because I know exactly who I am.” Kenya claims that when she saw her mother as a child at family gatherings, she tried unsuccessfully to make contact. “She would treat me like I was invisible.” Kenya decided when she was 12 to stop trying to communicate with her mother. “I decided never to let her hurt me again,” she explains. Her pain, she admits, turned to anger, most of which she directed at her grandmother. Though she lived for a few years with Patricia’s well-off family, Kenya was raised primarily by Doris, who lived with her husband, Virgil, and their five children in an impoverished neighborhood in west Detroit, Doris, caretaker of an elderly couple, scraped together money to buy a gown for Kenya’s first pageant at 14. “I was bitter. I hurt her feelings, saying, ‘You’re not my mother.’”

On tonight’s episode of RHOA, Kenya tries to get her mother to talk to her after the breakthrough she had with her father Ronald. Check out a preview clip below.

When Kenya arrived at her mother’s house, she knocked on the door and identified herself. She heard a voice inside say to not open the door and then she said she heard the lock get turned.

Kenya Moore ran away from home when she was just 12 years old and her father didn’t talk to her for five years. She confessed on RHOA that:

I have always had an on-again, off-again relationship with my dad. We don’t necessarily see eye to eye. But he’s one of the few family members I’m still in touch with.

Kenya did admit that she was selfish in running away and apologized for the pain she had caused her father, but she also let him know that she was hurt as well.

Patricia Moore, Kenya’s mother, is reported to be a special education teacher in Detroit, Michigan. 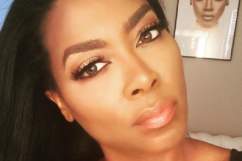 Who Is Kenya Moore Dating?