Celine Dion’s husband Rene Angelil has died after a long battle with cancer, a disease with which he has struggled for a couple years. In 2014, he had a tumor removed from his throat. Dion seemed to have come to peace with the idea of his death in recent months, stating to the public that her husband’s request was that he die in her arms. She told him, “Yes.”

Rene Angelil leaves behind three children with Dion – Rene-Charles, Eddy, & Nelson Angelil. In total, he actually has 6 children. Angelil married his first wife Denyse Duquette in 1966 and the two had a child named Patrick Angélil, in 1968. In 1974, he married ex-wife Manon Kirouac (aka Anne Renee). They had two children together – Jean Pierre Angélil (born 1974) and Anne Marie Angélil (born 1977).

She truly is a mother to her kids even when she is on stage she thinks of them @celinedion ?? pic.twitter.com/5UXJBoblrv

Dion and her husband married in 1994. The couple went on to have a son René-Charles in 2001 and fraternal twin boys Nelson and Eddy in 2010. At first, the couple had issues trying to conceive. In May 2000, Dion had two operations at a fertility clinic in New York to help her improve her chances of conceiving. They decided to use in-vitro fertilization after years of failed attempts to have a child. When Dion had her twins, she gave birth at St. Mary’s Medical Center in West Palm Beach, Florida, by Caesarean section. Son Eddy was named after Dion’s favorite French songwriter, Eddy Marnay, who produced five of Dion’s albums. Son Nelson was named after former South African President Nelson Mandela.

CHECK OUT EXCLUSIVE PHOTOS OF CELINE DION WITH HER 3 KIDS ( PHOTOS ) http://t.co/yyVwaOSc6x pic.twitter.com/k02IHWORPF

Dion and her family currently reside in Las Vegas, Nevada. Her children do not often make public appearances with her.

so many merry christmas on t way,I hope for u sweetie @CelineDion & #Rene together w kids." https://t.co/VxqUaOWi8t pic.twitter.com/h2bgRmldTm

For more news on Dion and Angelil: 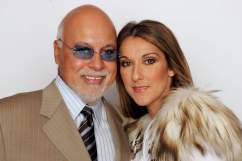 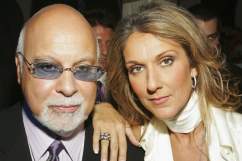