After tonight, Undercover Boss switches from Sundays to Fridays, so be sure to tune in on CBS Fridays. Now let’s get to Shoppers World on Undercover Boss. The official synopsis of tonight’s show reads: When President and CEO Sam Dushey goes undercover at Shoppers World to ensure he’s filling the shoes of his grandfather who founded his company in the 1930s, he’s shocked to find a security-deficient store in which shoplifters are walking away with his merchandise. The family-owned-and-operated discount apparel and merchandise retail store, founded by Dushey’s grandfather in Baltimore, Maryland, in the 1930s, currently has 40 locations throughout the United States. For more information on the episode, Shoppers World and Sam Dushey, check out our 5 Fast Facts below.

While Dushey is in disguise at one of his stores, he is trying to scan items with one of the workers and the scanner keeps “going down”. The store only has one scanner because the second scanner does not work. The employees complain that the store’s Wifi is horrible. Dushey talked about the technical problems to Biz Journals, explaining that:

One specific issue that certainly was a surprise to me was the deficiency of IT support to the stores. In one of my Ohio stores, I was asked to scan merchandise on the floor with our new wireless scanning guns while looking for items to markdown and move to clearance. Knowing how much money we had invested in these new scanning guns, I was excited to see firsthand how they improved our business and made our employees’ jobs easier. I must have been three minutes into the job when the gun broke down and the screen froze. The employee training me explained that this happens daily and her job takes longer to finish than it did without the scanning guns. I don’t think I would have ever known this had I not actually worked with the employee and the scanning guns myself.

In addition to the technical issues, the store’s alarm goes off when a shoplifter steals items from the store. Because there is no security, no one gets to the shoplifter in time. The employees seem to casually walk over to the door with barely an attempt to catch the culprit. This infuriates Dushey. Watch the above clip of the scene.

Since being part of the show, Dushey says:

We’ve hired two of the country’s top security and loss-prevention firms and have invested over $1.5 million in the top loss-prevention software and surveillance. I have also gone back to my grass-roots fundamentals of having a full-time security team in our buildings protecting our merchandise and, most of all, the security and well-being of our employees.

2. Sam Dushey Took Over the Company at Age 27

Shoppers World is a family business, started by Dushey’s grandfather and carried on by his father and relatives. When Sam Dushey took over as CEO, he was only 27 years old and he grew the company from 8 stores to 40 stores and to $250 million in annual revenue. He hopes to one day expand to 500 stores. Dushey told BizJournal about what he learned from Undercover Boss, explaining:

Shoppers World is in rapid-growth mode, especially over the course of the last five years. On the corporate level, we went through many changes. Going undercover allowed me to see the changes we implemented firsthand — the changes that my employees experience on a daily basis.

3. Shoppers World Stores Take Their Own Precautions to Eliminate Shoplifting

Because Shoppers World has many security issues, Dushey feels that the company needs to improve their security measures, but is impressed when he sees a store taking precautions on its own. One store instructs him to staple bags shut so that shoppers cannot put unpaid items in their shopping bags.

4. There’s Not Enough Space in the Stores For All the Merchandise

When Dushey tries to organize the shoe department, he has a very difficult time trying to fit all the merchandise in the amount of space given. In addition, Dushey notices all the dust and dirt around the store. Check it out in the above video.

5. Dushey Was Worried He Would Be Recognized While Undercover

While on Undercover Boss, Dushey worried that he would be recognized in his stores. Dushey told BizJournals:

I was very nervous that I would be quickly recognized. In one of the days, while working undercover in my Queens, N.Y. store, I was face to face with a veteran employee who had trained me as a kid and has been with our company for decades. I was almost sure when I met eyes with him that my cover was blown. I immediately ducked down in between racks of clothing and literally started to crawl out of the store on all fours. It wasn’t until I realized how good my disguise was that I knew he had no clue it was me. From the blonde hair to the earring and glasses, I barely recognized myself! I’m thankful to Undercover Boss for doing a great job putting me undercover.

I would definitely recommend this experience to other executives and CEOs so that they can get firsthand knowledge of their companies. It will allow them a true awareness of what is occurring inside their businesses, from the ground level. It was the best intel I could have asked for within my company.

to check out more episodes and seasons of Undercover Boss on Amazon. 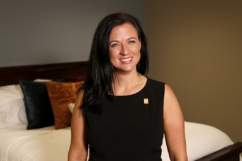