The Bold and the Beautiful returned on Tuesday with an all-new episode as Katie (Heather Tom) has a meltdown after witnessing Brooke (Katherine Kelly Lang) tell Bill she still loves him while Steffy (Jacqueline MacInnes Wood) receives another heartless text from Liam’s (Scott Clifton) phone.

Read on for B&B’s Tuesday, January 26 recap and scroll down and click “Next Page” to find out what could lay further ahead on B&B for Ivy and Liam. 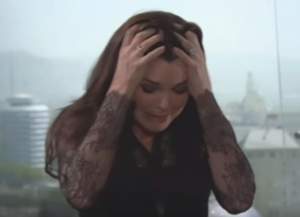 Katie — pictured in Tuesday’s B&B episode — gets emotional after seeing Bill and Brooke during an intimate moment. (CBS Screenshot)

Katie spies on Brooke telling Bill he’ll always be the love of her life. This brings Brooke — just outside Bill’s office — to tears. Brooke apologizes for getting so emotional, saying that working t Spencer Publications isn’t a good idea. Shortly after, Katie has a meltdown over Brooke’s broken promises.

Bill thinks that no damage has been done since Katie don’t know. Brooke says her sister’s happiness means more to her than anything. They agree to put their feelings away for Katie. Bill makes Brooke promise to remain working there as long as they can bury their feelings for Katie’s sake.

Meanwhile, Katie — now in her office — pours herself some liquor to calm herself down. She later breaks a photo frame with a picture of herself and Brooke. Brooke continuously freaks out after thinking about Brooke’s past promises to not betray her again. Katie soon falls over. Later, Brooke enters the room and finds Katie on the ground. Katie tells her that she knows what she said to Bill; she’s still in love with her husband. 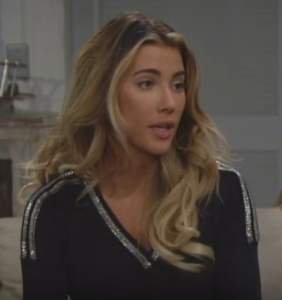 Wyatt (Darin Brooks) and Steffy agree that they had a good day together. He asks whether there’s been word from Liam. She indicates that there hasn’t been. Meanwhile, Liam remains passed out at Quinn’s.

Steffy cannot accept that Liam couldn’t give her one more chance. She apologizes to Wyatt for always bringing up Liam. He says at least he knows why Ivy left. She still thinks it was terrible. They continue to bond. Steffy says it could’ve been the worse day of her life and Wyatt was nice enough to make sure it wasn’t. Wyatt brings up their kiss on the beach, saying it was, “pretty awesome.”

Steffy jokes with Wyatt that her memory of their kiss is fuzzy. She later says it was her way of thanking him for caring for her. Steffy explains that she’d like to get on with her life, but Liam and her have “so much history.”

Later, Ivy calls Quinn to let her know that she enjoyed worked with her. She also says that she did truly love Wyatt and is sorry if she caused problems. Ivy tells Quinn that she’s concerned about Liam and asks her if she knows where he is. She informs Quinn about how he hit his head on the plane. Quinn questions why Ivy would think that she knows Liam’s whereabouts. Quinn then hangs up on her.

She then sends another text to Steffy, pretending that she’s Liam.

Wyatt is upset that Liam would send her such a text. He says that he knows it’s too soon, but he feels something between them, so why should they fight it. Wyatt says he’s a man that she can count on. They kiss again; she appears confused.