The Bold and the Beautiful returns on Wednesday with an all-new episode as the situation between Brooke (Katherine Kelly Lang) and Katie (Heather Tom) over Bill (Don Diamont) turns into a physical one.

Katie Gets Physical With Brooke 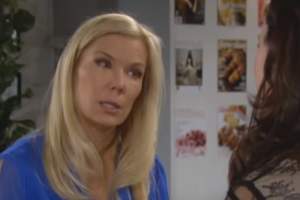 Brooke — pictured in Wednesday’s B&B episode — finds herself on the receiving end of an attack by her sister, Katie. (CBS Screenshot)

Everything seemed to be working out just fine when Brooke was hired to work at Spencer Publications. Bill and Katie received a true asset to the magazine and Katie was ready to put her past with Brooke behind her. Bill — who couldn’t resist his feelings for Brooke — ended up kissing her inside his office. From that moment on, Bill continued to daydream about both his past and a future with Brooke. Brooke admitted that these feelings were mutual. However, she made it abundantly clear that they must bury their feelings for Katie’s sake. Meanwhile, Katie — unaware at the time of the romantic dynamic between the two — continually talked up her sister and how proud she was to be working with her.

Katie’s inclination towards her sister was short-lived, as she caught Brooke professing her love to Bill. After witnessing this, Katie then suffered a meltdown inside her office. In a rage, she poured herself some liquor and smashed a picture frame with herself and Brooke in it. Later on, Brooke found Katie sprawled across the latter’s office floor.

On Wednesday, when Brooke suggests that Katie get a doctor, Katie confronts her sister about being in love with her husband. According to Celeb Dirty Laundry, Katie then “will physically attack Brooke for stirring up all of this trouble.”

Meanwhile, the site also reported that “Bill might be fishing for tips on how to show Katie he cares.” Not knowing how to fix the situation, he’ll query Caroline (Linsey Godrey) on romantic things to do for her. She informs Bill that Ridge (Thorsten Kaye) takes her places like the beach and Mulholland Drive. In response, Bill says it’s because he’s cheap.