The Bold and the Beautiful returned on Monday with an all-new episode as Quinn (Rena Sofer) stuck with her evil plan to keep Liam (Scott Clifton) away from Steffy (Jacqueline MacInnes Wood) while Katie (Heather Tom) found out about Bill’s (Don Diamont) feelings for Brooke (Katherine Kelly Lang).

Read on for B&B’s Monday, January 25, 2016 recap and a spoiler on Quinn’s future plans with Liam. 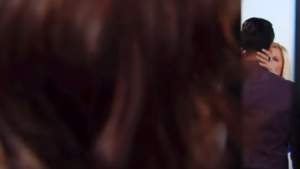 On Mondays B&B episode, Katie catches Bill and Brooke in the middle of an intimate moment. (CBS Screenshot)

To say that Bill has had a hard time focusing on Spencer Publications around Brooke is an understatement. To the excitement of Katie, Brooke started working at Spencer, which was supposed to be the beginning of a stronger business relationship. However, things haven’t panned out that way as Bill continues to fantasize of his past and potential future with Brooke. While Brooke admitted the feelings were mutual, she’s been keen — since the two kissed — to not act on them again. Katie has been enjoying an improved relationship with Brooke.

At Spencer Publications, Bill tells Brooke that he wishes he could turn off their memories with together, but he can’t. Bill says he wont erase them, but he can stay committed to Katie. They continue bickering over what to do about the situation. They pledge to be friends. Brooke says betraying Katie again isn’t an option, and she wishes the circumstances were different.

Meanwhile, Katie tells Eric (John McCook) that she can’t imagine life without her sister being back in it, and how much she loves her husband. Eric’s impressed that her and Brooke have reconnected.

Later, Katie catches Brooke telling Bill that she loves him, and that he’ll always be the greatest love of her life; Katie can never know that. Just outside the door, Katie’s extremely emotional after hearing this. 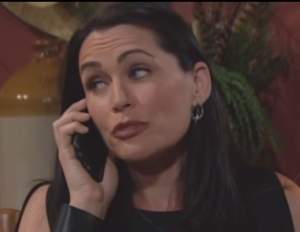 Steffy and Wyatt (Darin Brooks) have been spending a considerable amount of time together. While Steffy was resistant at first to his advances, she’s continually gotten closer to him. On Friday, Steffy finally started to believe that it was over between herself and Liam. This was due to a text message from Liam’s phone — unbeknownst to Steffy — that was sent by Quinn. Quinn has been pushing Wyatt to go for Steffy for quite some time. However, she sunk to a new low when she took a passed out Liam to her cabin in Topanga. In response to Liam’s absence, Steffy ended up going surfing with Wyatt and kissing him afterwards.

On Monday, Wyatt and Steffy kiss on the beach. Wyatt thinks they need more practice. Steffy tells Wyatt the beach is exactly what she needed, as they horse around.

Liam tells Quinn he’s feeling strange; he doesn’t know who he is, or what day it is. Later, Quinn says “maybe this is the universe’s way” of getting Steffy and Wyatt together. Liam says Steffy is too good of a person to be in pain. She thanks him for making her feel like herself again.

Quinn calls Wyatt. He tells her that Liam texted her that he isn’t coming. Wyatt tells Quinn that he’s hoping to use Liam’s absence to get through to her. Quinn tells him to take advantage of the situation and charm her.

Later in the week, yet another text from Liam “could prompt Steffy to accept defeat,” according to Celeb Dirty Laundry. Quinn — while undecided at what to do with Liam — most certainly will be the one who sent the second text as she persists with her evil plan.