The Bold and the Beautiful returns on Thursday with an all-new episode as Brooke (Katherine Kelly Lang) informs Eric (John McCook) about what happened to her at Spencer Publications while Katie (Heather Tom) tries talking some sense into Bill (Don Diamont). 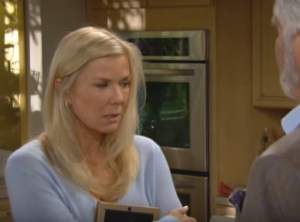 Brooke — pictured above in Thursday’s B&B episode — informs Eric about the demise of her relationship with Katie. (CBS Screenshot)

Brooke’s life seemed to be on the upswing after taking a job at Spencer Publications. However, one thing led to another and she wound up kissing Bill. From that point on, Bill began continuously fantasizing about Brooke, and then found out that the feelings between them were mutual. Although Brooke insisted that she and Bill keep the relationship as strictly business, Bill continued to struggle fighting his feelings.

Ultimately, Bill and Brooke decided that they’d have to bury their feelings out of respect for Katie. However, that plan fell through when Katie decided to eavesdrop on the conversation right outside Bill’s office. Katie caught Brooke telling Bill that she’ll always love him. After witnessing this, Katie suffered a meltdown in her office. Later, Brooke found her and suggested they call a doctor, but Katie eventually insisted that she can no longer trust her. The situation got physical and Brooke eventually left.

On Thursday, Brooke speaks to Eric at Forrester Creations over what transpired between herself and Katie.

“Katie knows. She knows that I’m still in love with Bill.”

Brooke — who had a hard enough time being forgiven by Katie the first time she betrayed her — also admits to Eric that she thinks the damage to their relationship is now permanent.

“I really think I lost her. Forever.” 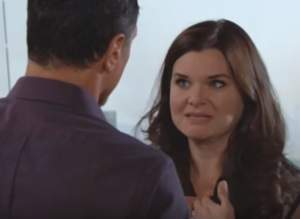 Pictured left to right, Bill and Katie, as Katie confronts Bill over what she witnessed between Brooke and him. (CBS Screenshot)

Meanwhile, Bill — who wasn’t aware that Katie heard his recent conversation with Brooke — tried picking Caroline’s (Linsey Godfrey) brain on romantic ideas for Katie. When she told him that Ridge (Thorsten Kaye) took her places like the beach and Mulholland Drive, Bill said that was because he’s cheap.

On Thursday, Katie confronts Bill over what happened between himself and Brooke. Brooke also insists that Bill not always focus on his own needs.

“You’re my husband. I’m her sister, I mean, have a little self control. Think about someone else for a change.”

Later, Katie indicates to Bill that she’ll never back down from keeping their relationship intact.

“I will protect what’s mine.”