The Bold and the Beautiful returns next week with all-new episodes as the situation between Quinn (Rena Sofer) and Liam (Scott Clifton) gets awkward while Sasha (Felisha Cooper) threatens Julius (Obba Babatundé) and makes Zende (Rome Flynn) an offer he may not be able to pass up.

Read on for next week’s B&B spoilers. 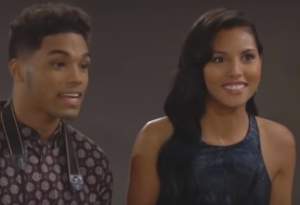 Pictured left to right, Zende and Sasha, as Sasha makes Zende an offer next week that he may not be able to refuse. (CBS Screenshot)

Just when Sasha’s future in LA was looking bright, Nicole (Reign Edwards) — her supposed best friend — pulled out her opportunity rug from right underneath her. Sasha had stepped in to model for Zende when Nicole came down with pregnancy-related morning sickness. Initially unsolved on Zende’s skills, Rick (Jacob Young) was impressed enough by Zende’s on-shoot chemistry with Sasha to offer her a permanent print model position at Forrester Creations. However, Nicole — who Rick’s obligated to for being himself and Maya’s (Karla Mosley) baby’s surrogate — had him rescind his offer to Sasha.

Next week, Sasha has a conversation with Julius. Down on her luck and irritable, she voices how sick she is of being his secret daughter, according to Celeb Dirty Laundry. Julius — who told her to go back to Illinois after her modeling opportunity fell through — takes Sasha’s threat seriously.

Also, the site reported that Sasha makes Zende an offer he’ll be tempted to take. “A no-strings night of passion.” Sasha evidently wants to stay put in LA at all costs.

Liam Gets Too Close for Comfort for Quinn 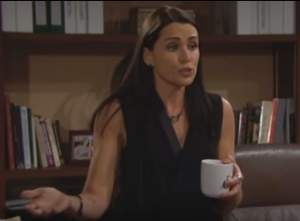 Quinn — pictured in Monday’s B&B episode — may have bitten off more than she can chew with a disoriented Liam. (CBS Screenshot)

Meanwhile, Quinn — who’s trying to buy Wyatt (Darin Brooks) more time to secure a relationship with Steffy (Jacqueline MacInnes Wood) — continues keeping Liam holed up at her Topanga cabin. Liam — who suffered a concussion while trying to assist Ivy (Ashleigh Brewer) on a plane — still doesn’t recall who he is or what’s going on. Although Liam’s starting to feel like someone is waiting on him, he’s still in the dark about Quinn’s deceptive ways.

Next week, Quinn is happy to hear that Wyatt’s been making more leeway with Steffy. Nonetheless, the dynamic between herself and Liam is getting more awkward. Liam — in his bewildered state — called her his guardian angle and is seemingly smitten by her. He’ll want to know more about how they know one another, reported Celeb Dirty Laundry. Quinn then realizes that she may been in over her head as Liam gets awkwardly closer to her.