The Bold and the Beautiful returns on Tuesday with a brand new episode as Nicole (Reign Edwards) admits she’s scared of losing Zende (Rome Flynn) while Steffy (Jacqueline MacInnes Wood) continues pleading with Liam (Scott Clifton) to not let her go. 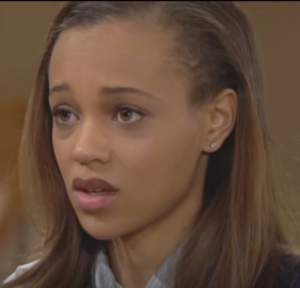 Nicole — pictured in Tuesday’s B&B episode — comes clean to Zende about her fears of losing him. (CBS Screenshot)

Just when Sasha (Felisha Cooper) thought she getting graced with a lifetime opportunity, she got it taken away by Nicole. Nicole — Sasha’s supposed bestie — wasn’t liking all the attention Zende was giving to Sasha during their print modeling shoots. After initially congratulating Sasha, Nicole later had Rick (Jacob Young) let her go. Although Rick didn’t exactly agree with it, he felt obligated since Nicole’s carrying himself and Maya’s (Karla Mosley) baby.

On Monday, Sasha went to Zende’s and told him about Nicole getting her fired. Zende insisted that Nicole would never do such a thing.

On Tuesday, Sasha finishes her conversation with Zende, admitting that Nicole crushed the greatest opportunity of her life.

“She took the greatest opportunity I’ve ever been given and she threw it all away.”

Later, Nicole — still insecure with her relationship — confesses her deepest fears to Zende.

“I’m really scared of losing you.”

Steffy Tells Liam She Knows ‘It’s Not Over’ 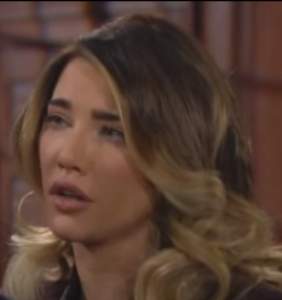 Meanwhile, Steffy and Liam’s relationship continues being on the rocks. Steffy was initially upset to hear that Liam went to Australia with Ivy (Ashleigh Brewer), she initially simmered down; with the help of Wyatt (Darin Brooks).

Liam arrived home to find Steffy fast asleep in Liam’s arms. In response, Liam — without informing Steffy why he was doing so — to kick her out of their home.

On Tuesday, Wyatt finds Liam at Quinn Artisians Jewelry and questions him about Ivy.

“I thought you were off getting cozy with my ex?”

Steffy continues trying to patch things up with Liam, unaware that he saw her and Wyatt together.

“You’re looking at me as if, as if I betrayed you.”

She still holds a torch for him.

Later, Wyatt informs Quinn (Rena Sofer) — who’s happy to hear about Liam and Steffy’s demise — about what Liam’s up to.

“Not only is Liam leaving the company, but he’s distancing himself from Steffy.”

Read More
TV
Nicole admits her fears to Zende while Steffy continues fighting for Liam's love in Tuesday's The Bold and the Beautiful episode.