The Bold and the Beautiful returned on Monday with an all-new episode as Nicole (Reign Edwards) felt guilt for sabotaging Sasha’s (Felisha Cooper) modeling opportunity while Carter (Lawrence Saint-Victor) tried convincing Zende (Rome Flynn) that he can do better than Nicole.

Read on for B&B’s Monday, January 18, 2016 recap and scroll down to click “Next Page” for future spoilers on Wyatt and Steffy.

Nicole’s Remorseful for What She’s Done 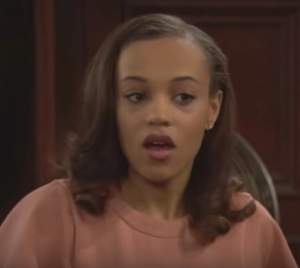 Nicole — after being approached by Sasha — now feels bad about sabotaging her print modeling career at Forrester Creations. (CBS Screenshot)

Zende tells Carter and Veronica that Rick’s (Jacob Young) decision on Sasha doesn’t make sense since they both worked so well together.

Later, Sasha pretends she didn’t overhear Nicole bad-mouthing her to Rick. Sasha dries her tears and then informs Nicole that she’ll no longer be a print model. Sasha compliments Nicole for never letting her down; this makes Nicole feel guilty.

Carter tells Zende that he’s a young good-looking guy that can do better than Nicole. Later, Zende tells Carter that he’d like Nicole to get past this pregnancy so they can move on with their relationship.

Nicole tells Rick that she spoke to Sasha and feels bad about what she’s done. Rick says that Nicole doesn’t have to be jealous of Sasha and Zende; Nicole says there “isn’t and never will be anything” between them two.

Julius (Obba Babatundé) informs his wife that he hates seeing Nicole suffer; he means her relationship with Zende.

Sasha Informs Zende About What Nicole Did 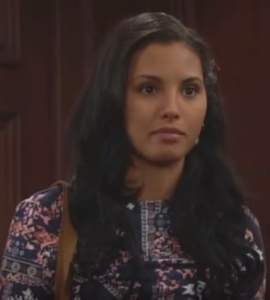 Sasha — who didn’t tell Nicole about what she heard said to Rick — informs Zende about how Nicole got her fired. (CBS Screenshot)

Later, Sasha informs Julius about how Nicole sabotaged her modeling opportunity. Julius thinks it’s because she’s working with Zende and that’s Nicole’s man. Sasha says she didn’t do anything wrong. Julius thinks she’s better off going back to Illinois. He gives her money to purchase a bus ticket; she doesn’t take it.

Later, Sasha shows up at Zende’s, wanting to hang out until Nicole gets here. She informs him of what Nicole did to get her fired. Zende is shocked.

Meanwhile, Bill’s still having trouble forgetting about the good times with Brooke. Katie, Brooke and Bill bond with his child. Katie says she’s proud of Brooke for her independence. Katie thinks that Brooke’s now at a point in her life to meet a new man; Bill doesn’t seem thrilled.

Brooke informs Bill about a new project she’s working on, “The Power of the Kiss.” Meanwhile, he’s daydreaming about kissing her.

Pages: 1 2
Read More
TV
Liam and Steffy drift further apart when she fails to admit that Wyatt was in her bed. Wyatt uses this opportunity to get closer to Steffy in this week's The Bold and the Beautiful episodes.