The Bold and the Beautiful returned on Wednesday with an all-new episode as Katie (Heather Tom) confronted Brooke (Katherine Kelly Lang) about her feelings for Bill (Don Diamont) while Wyatt (Darin Brooks) spoke to Steffy (Jacquelin MacInnes Wood) about his supposed independence.

Katie Confronted Brooke About Her Intentions With Bill 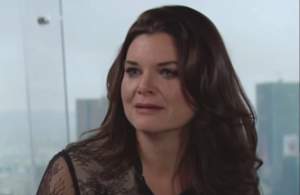 Katie — pictured above in Wednesday’s B&B episode — goes off on Brooke over what she heard her say to Bill. (CBS Screenshot)

Brooke and Katie seemed to be hitting if quite well. Katie was finally starting to fully trust her sister again. To top if off, Katie even spoke about how huge of an asset that Brooke was to Spencer Publications. Little did Katie know, Bill and Brooke kissed behind Bills office doors. Since that kiss, Bill has tried extremely hard to put his past with Brooke behind him. However, he keeps fantasizing about her, nonetheless.

This week, Brooke finally confronted Bill about their feelings for one another. Brooke told him that if he couldn’t bury them, she would no longer be able to work with him. They both agreed that leaving the past in the past is what’s best for Katie. On Monday, Katie caught the end of that conversation, hearing her sister tell Bill that she’s always love him. This was the catalyst for her meltdown, as she downed some liquor and fell to the floor.

Soon after, Brooke entered her office and wanted to call the hospital. Katie — extremely distraught over her discovery — lashes out at Brooke, who wasn’t aware she’d been heard.

On Wednesday, Brooke tells Katie she didn’t even want to be at Spencer Publications. Katie questions Brooke’s prior promises. Brooke says she meant everything she said. Katie accuses her of not even knowing when she lies.

“You don’t even know when you’re lying. Do you?”

Brooke — in tears once again and ignoring the obvious — insists that Katie needs medical attention.

“I found you on the floor. You need to call a doctor.”

In the process, Katie lets her emotions take over, not wanting to believe what she heard come out of Brooke’s mouth in Bill’s office.

“You can’t possibly think that my husband is the love of your life.”

Brooke says it wasn’t Bill that did anything wrong, it was her. Katie says she knows it was. Brooke insists she call a doctor. Katie says she’s only going after Bill because he’s not Ridge (Thorsten Kaye). Katie calls herself a fool for believing she could rescue Brooke. Katie then gets physical with Brooke after Brooke tries holding onto her. Brooke says that Katie can cut her off, but to not do it to Bill and her family. Katie says that Brooke can’t tell her what to do; she heard the rumors of what the guys used to call her. Katie says, “Take your business elsewhere.” 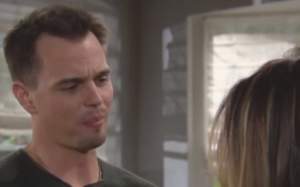 Meanwhile, Wyatt continues to work his romance magic on Steffy. He’s been helped — more than he’s aware of — by his mother, Quinn (Rena Sofer). While Wyatt’s been cozying up to Steffy in Liam’s (Scott Clifton) absence, Quinn’s been keeping a passed out Liam at her Topanga cabin. Since taking him there, she’s sent to texts to Steffy, posing as Liam. The first informed Steffy that he wasn’t coming home to talk things through. The second stated that he needs time on his own. “It’s over.”

On Wednesday, Wyatt tells Steffy that Liam would never make a decision he had to avoid. She tells him that she was under the impression that when Liam returned from Australia , he changed his mind about her. Steffy wants to know how Wyatt pledged his life to someone, and still ended up being okay after it didn’t work out.

Wyatt seemingly tries to make sense of Liam’s text to Steffy, who remains as confused as she’s been since he left. Wyatt explains to her how he’s gotten through the repeated heartaches he’s suffered.

“I knew how to make myself happy.”

In response, Steffy says she doesn’t know who she is anymore.

Meanwhile, Quinn goes through pictures of Liam and Steffy on his phone. He wakes up while she’s does so.
Liam says he saw Quinn taking care of him. He wants to leave, but she insists he stays. He says it’s awkward because he doesn’t even know Quinn’s name. She thinks he’s joking. Liam insists that he’d remember such a beautiful woman’s name. Quinn is thrilled that she can tell Liam whatever she wants to and he’ll believe it.

Quinn calls Wyatt and tells him that he needs to get Steffy prepped to slam the door in Liam’s face for when he changes his mind.

Will Steffy completely let go of Liam and further let Wyatt in, or will she continue to hold onto hope for her ex-fiancé?

In Bill’s office, Caroline informs him of what Ridge has done for her romantically; he takes her to places like the beach or Mulholland Drive. Bill says that’s because he’s cheap. Caroline then warns Bill that she’ll get hormonal on him if he keeps it up. Bill — unaware of Katie’s rage — says he wants to make sure that wherever he takes Katie, she doesn’t regret it.