The Bold and the Beautiful returned on Friday with an all-new episode as Brooke (Katherine Kelly Lang) was determined to fix her issues with Katie (Heather Tom) while Liam (Scott Clifton) continued being disoriented under Quinn’s (Rena Sofer) watch. 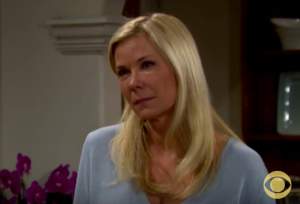 In Friday’s B&B episode, Brooke attempts to repair the relationship between herself and Katie. (CBS Screenshot)

Katie and Brooke were miraculously hitting things off once again, as the latter took a high profile position alongside her sister at Spencer Publications. On a few occasions, Katie even boasted about how great it was to be so close to Brooke again. Little did she know that Brooke, still held a torch for Bill (Don Diamont), who who had equal feelings for his ex. Making matters worse, Bill has continued to fantasize about both the past and a future with her. However, the dynamic between the trio changed drastically when Katie — just outside the door of Bill’s office — caught Brooke professing her love for her husband. In an instant, Katie’s trust in her sister was broken. Shortly after Katie returned to her office, poured herself a drink, and had a meltdown. When Brooke showed up, Katie said she wanted her out of her life.

On Friday, Brooke tries to repair the relationship between herself and Katie. She tells Katie that Katie wasn’t wrong to think that she changed. Brooke says she was naive about the situation, and her feelings for Bill. Katie says Brooke’s not the only one that was naive. Katie wonders what their mother (Robin Riker), Storm (William deVry) would think of this. She tells Brooke that nobody matters to her unless she gets what she wants. Katie goes on to say that her sister is pathological, and always feels the inkling to made ever man her conquest. Brooke says it’s not true; she’s been fighting her feelings. Katie doesn’t believe it. Brooke is crying. Katie says, “queue the tears.” Katie says she’ll ruin any relationship. This is Katie’s life, and she’ll never be alright around her.

Later, Katie has another meltdown. When Brooke tries to help, Katie slaps her. Brooke says she wanted to stay away from Spencer Publications, but Katie insisted she takes the job. Brooke says she closed herself off and partook in alcohol to “do right” by her sister and number herself from chasing after Bill. Brooke says that she loves her. Katie says those are just words, and that she wants her to stay away. Brooke says she’ll be there for Katie if she ever needs her. Katie tells Brooke that she’ll never need her again.

Meanwhile, Eric (John McCook) talks to Bill about what happened between him and Brooke. Bill informs Eric that Katie wants Brooke out of her life. Eric says that Bill must fix the situation. Eric isn’t buying that Brooke’s feelings are one-sided. Eric says that he knows because he once loved her.

A Deceptive Quinn Continued Falling Into Favor With a Disoriented Liam 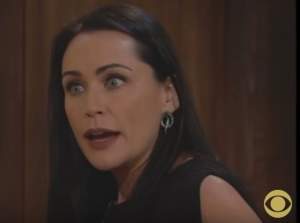 Quinn — pictured above in Friday’s B&B episode — is happily shocked to see just how far gone Liam is. (CBS Screenshot)

Liam — who’s suffering the after-affects of his Australia flight concussion — has been holed up at Quinn’s Topanga cabin for quite some time. After packing up his office at Forrester Creations, Liam was ready to get inside his car and leave, but then passed out while talking to Quinn. In response, Quinn stuck Liam in his own backseat and drove him to her cabin. Since then, Liam has come in and out of consciousness. Unfortunately, he still doesn’t realize the extent of what’s going on, let alone know who he is. Quinn continues trying to capitalize on Liam’s state, as he’s sent Steffy two texts from his phone indicating he’s not coming home and moving on with his life.

On Friday, Liam — who had called Quinn his “guardian angle” — expresses how appreciative he is of her taking him in. Quinn tells Liam that she’ll get him some Miso soup. Liam says that she has kind eyes. Later, he says he can’t shake “this feeling” of somebody. Quinn tells him that his mind is playing tricks on him. Liam disagrees, saying that he thinks he needs to go. Quinn asks him how he doesn’t know that she’s the one that needs him. He responds by saying that he feels like he’s in the arms of an angle with her. Liam then kisses her on the cheek. 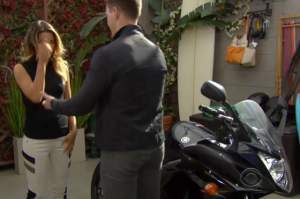 Pictured left to right, Steffy and Liam, as Steffy showed Wyatt just how thankful she is for his reliability. (CBS Screenshot)

Quinn’s deceptive ways have clearly been working well, as Wyatt (Darin Brooks) has made some romantic leeway with Steffy (Jacqueline MacInnes Wood). While Liam is stranded at Quinn’s cabin, Wyatt continues making romantic progress with Steffy. In order to encourage Steffy to get back on the bike of life when she falls off, Wyatt bought her a new black motorcycle. However, he didn’t quite get the reaction he wanted as Steffy showed indications of holding hope for Liam.

On Friday, Steffy tells Wyatt that she’ll ride the motorcycle, but wants to do it solo. She takes a ride and is later appreciative of Wyatt for letting her do it. Steffy thanks him for always being there for her. Wyatt says he always will be. He kisses her. Wyatt says that while his past relationships were “trial and error,” his understanding of Steffy comes naturally. Steffy acknowledges that he’s a man “that follows through” and they kiss again, but more passionately. Eventually, Steffy says, “I can’t do this,” saying that she’s still trying to figure out why Liam left her. Wyatt gets frustrating and says that he wants her to let him help her; to let Liam go. They kiss again.