The Bold and the Beautiful returns on Wednesday with an all-new installment as Nicole (Reign Edwards) becomes jealous of Sasha (Felisha Cooper) when she gets wind of Rick’s (Jacob Young) decision. 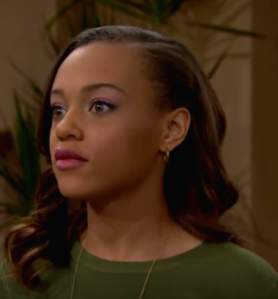 The relationship complications between Zende (Rome Flynn) and Nicole haven’t been at a shortage lately. Nicole isn’t only having to maintain her connection with Zende, but also overcoming her pregnancy issues. While trying to model for Zende, Nicole came down with morning sickness. In her place, Sasha stepped in to help out Zende. Zende went from a stiff photographer to loosening up, impressing Rick in the process.

Nonetheless, Sasha continues posing and flirting with Zende. However, Sasha may seek revenge against Nicole once she finds out her best friend is trying to sabotage her behind the scenes at Forrester Creations.

On Wednesday, Nicole tells Rick that she isn’t thrilled about Sasha’s modeling job. According to Celeb Dirty Laundry, Nicole plays “the surrogate card in an effort to get Rick’s decision reversed.” This will affect Nicole’s friendship with Sasha and put Rick in a bind. 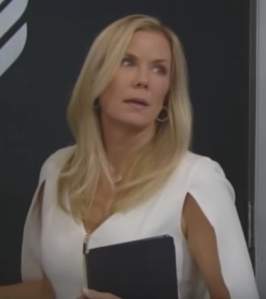 In Wednesday’s B&B episode, Brooke realizes she may of bit more off than she can chew at Spencer Publications. (CBS Screenshot)

Brooke (Katherine Kelly Lang) is now working at Spencer Publications, which has Katie (Heather Tom) wondering how it will impact life at the office. Katie realizes that two Logans in the same working environment may not pan out well. Meanwhile, Brooke realizes that her new job comes with unanticipated challenges.

At the same time, Brooke continues trying to ignore her romantic inclination for Bill (Don Diamont).

Read More
TV
Nicole plays the surrogate card to Rick on Sasha's modeling gig in Wednesday's The Bold and the Beautiful episode.