Over the moon to finally share with you my greatest role: #Mommy Michael Cooney and I proudly present ?Jemma Kate Collins Cooney? Born 1/23/16 #HappiestDayOfMyLife

Former The Young and the Restless cast member, Jessica Collins, shared the news on Thursday that she gave birth to a healthy baby girl on January 23.

Collins, 44, and her partner Michael Cooney took to Twitter to reveal their bundle of joy, Jemma Kate Collins Cooney. This is the actress’s first child.

From 2011 to 2015, Collins played the role of Avery Bailey Clark on Y&R. Her character was predominantly known for her feud with Phyllis (Gina Tognoni) over a romance with the latter’s ex, Nick Newman (Joshua Morrow). She exited the popular soap on July 21, 2015 and spoke to Soap Opera Digest about her dissatisfaction with her character’s direction.

“I’ve been disappointed with the story and the direction and integrity of my character for quite some time, but I was still hopeful we might all be able to turn it around. Then my contract was up for renewal and I wasn’t happy with their offer. I was told there was no room for discussion, which made me realize there wouldn’t be much discussion for the character, either.”

Collins also donned the part of Jackie Denardo on FX’s It’s Always Sunny in Philadelphia from 2011 to 2013, amongst other notable TV roles.

Check out Heavy’s Young and the Restless spoilers page for continued updates, news and rumors. The program airs Monday thru Friday from 12:30pm ET to 1:30pm ET on CBS. 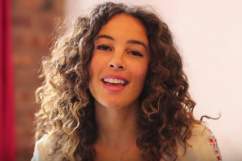 Read More
TV
Former The Young and the Restless actress, Jessica Collins, has a brand new role, as a mother, after recently giving birth to a beautiful baby girl.